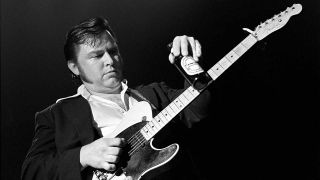 In March 1989, American magazine Guitar Player ran their now legendary ‘Unknown Greats’ cover feature. Subtitled ‘Amazing Players You’ve Never Heard Of’, the cover was a photo of a man wearing a Phantom Of The Opera-style half-mask. Cradled in his left arm was a beat-up ’53 Fender Telecaster.

To give this some context, other Guitar Player cover stars featured that year included cats you recognised by a single name: Jimi, Keef, Satch, not to mention James and Kirk from Metallica. Even the remainder, future Deep Purple man Steve Morse, Michael Jackson side-woman Jennifer Batten and blind Canadian bluesman Jeff Healey, had enough profile to guarantee them a place on the newsstand.

The unknown great, the man in the mask, was a rockabilly guitar player from Washington DC named Danny Gatton. Middle-aged, out of shape, with a 50s quiff, Gatton was an unlikely cover star and guitar hero circa 1989; hair metal was still doing brisk business that year. It was all Spandex drawers, cans of hairspray on your rider, and single-digit BMIs. Putting an obvious throwback like Danny Gatton on the cover of a magazine was a brave move.

The magazine justified its editorial decision with the provocative line: “He’s been called the World’s Greatest Unknown Guitarist, but what famous guitarist could outplay him?” In an effort to drive the point home, the issue came with a floppy disc recording of Gatton blasting his way through the instrumental Nit Pickin’ [aka Nitpickin’], backed by upright bassist John Previti and drummer Dave Elliott. The track, available on the 2004 Gatton collection Unfinished Business (and Spotify), is Gatton’s jaw-dropping calling card.

There was fun Ren & Stimpy soundtrack-a-like stuff in there too. It was like someone frogmarched Chet Atkins, Jerry Reed, Merle Travis and a bunch of other guitar-playing 50s heavy hitters into Seth ‘The Fly’ Brundle’s Telepod.

What came out the other side was Danny Gatton, the walkin’, talkin’ encyclopaedia of classic American guitar styles. Nit Pickin’ answered the magazine’s ‘What famous guitarist could outplay him?’ conundrum with another question: ‘Who would dare try?’

The truth is that Danny Gatton wasn’t completely unknown. Obviously. He’d played guitar for country singer Roger ‘King Of The Road’ Miller and rockabilly revivalist Robert Gordon, a kind of American Shakin’ Stevens. He had a reputation in his home state as a dynamic performer. He was the guy who, in the words of his Guitar Player feature, “tuned his guitar to the buzz of fluorescent lights and played note-perfect slide using anything from a Heineken beer bottle to a human skull…”

He was a showman, a gunslinger… and he attracted attention. In the mid-80s, guitar students would pass around a hissy bootleg tape of a 1981 gig Danny played with Robert Gordon and his band The Wildcats at the Berkeley Square nightclub in Berkeley, California.

Now known as The Humbler, the album features an accidentally taped mind-blowing sound-check jam by Danny and future Stevie Ray Vaughan & Double Trouble bassist Tommy Shannon. Robert Gordon was the star of the show, and he ran a tight ship. But on that Berkeley date he set his guitarist loose in the audience. Even by Gatton’s self-imposed high standards, this is breathtaking work.

Such was Gatton’s impact that high praise arrived from even the most unexpected of quarters. In 1989, Steve Vai lorded over the electric guitar’s brave new world. He’d made his bones with Frank Zappa, impressed via high-profile stints with Alcatraz and David Lee Roth, not to mention John Lydon’s PiL.

Okay, that year he ‘phoned in’ his collaboration with Whitesnake on Slip Of The Tongue, but by 1990 he released his career defining Passion & Warfare album. The point is, Steve Vai is about as far away from Danny Gatton in style and approach as it is possible to find – if Gatton was a 50s Ford, Vai was a flying saucer.

Yet in recent years Vai had this to say about the one-time mystery man from Washington DC: “Danny Gatton was a players’ guitar player, hailed by both Rolling Stone and Guitar Player as the greatest unknown guitarist anywhere. His legend has only grown since his untimely suicide in 1994, along with appreciation for his blinding speed, effortless genre-hopping, flawless technique, and never-ending appetite for tinkering and problem-solving. Danny Gatton comes closer than anyone else to being the best guitar player that ever lived.”

In a single paragraph, Steve Vai summed up everything that was remarkable, and tragic, about Danny Gatton. If “the best guitar player that ever lived” is a bold claim, few are more qualified than Vai to name the guitar world’s high-water mark.

Picking through the rest of Vai’s comments, Gatton’s “effortless genre-hopping” came from decades of playing club gigs and last-minute deputising jobs where he had to think on his feet.

This is the guy who could slip his guitar into an alternative tuning as he played. He could also authentically nail the sound of a Hammond B3 organ by using his Telecaster’s tone control and the vibrato on an old Fender Super Reverb amplifier.

The opening paragraph of Dan Forte’s Guitar Player exposé of Danny Gatton made much of the now unmasked genius’s chameleonic abilities: “Imagine your all-time favourite mainstream jazz guitarist trying to perform a credible Johnny B Goode. How about your number-one classic blues artist trying to tackle Orange Blossom Special? Here’s a good one: your typical heavy-metal superstar stumbling through the changes of a jazz standard like Cherokee. Even some of the greatest players in their respective fields would be like fish out of water if you stuck them in another idiom. After all, even Joe Pass, BB King and Eddie Van Halen aren’t expected to master every style. Even the true giants have their limitations.”

By the end of the piece, the message was clear: Danny Gatton – Jack of all trades, master of all. But his legendary genre-splicing approach (he liked to call it “redneck jazz”) didn’t always stand him in good stead. The 80s were all about finding your niche, and A&R people struggled to find a place for a middle-aged guitarist who flat-out refused to be pigeonholed.

Tracking back to Vai’s tribute, Gatton was indeed a relentless tinkerer. His look wasn’t a record company image. Gatton’s other great love was vintage Ford cars, and he carried over to his gear the need to break things down then tweak and repair. Perpetually torn between his two great loves, he eventually traded his ’53 Fender Telecaster for a ’36 Ford Coupe.

Originally a Gibson player, he eventually moved onto that ’53 Tele. Whether the switch was influenced by his fellow Telemaster Roy Buchanan is unclear. What is clear is that Gatton set about tweaking his Tele with custom pickups wound by close friend Joe Barden, and reflective cubic zirconia markers set into the side of his guitar’s neck so he could find the right frets on a darkened stage.

Thirty years on from his Guitar Player cover, Danny Gatton remains a cult figure. Like his old nemesis Roy Buchanan, he is often damned by the so-called accolade of a ‘players’ player’, the obscure guy who turns on the players with the big names and big bank accounts. It’s right there in the opening line of Steve Vai’s tribute.

He eventually got his major-label record deal, and released the epic and typically eclectic 88 Elmira St [named after his childhood home] on Elektra in 1991. It was actually his fifth album – he’d cut his debut, American Music, back in 1975 – but his first on a major label. The more rock’n’roll-focused Cruisin’ Deuces followed in 1993.

By the end of the following year he was dead. By all accounts he had been suffering bouts of depression for years. On October 4, 1994, he locked himself in his garage and committed suicide by gunshot. He was 49.

Danny Gatton’s legacy is that he showed us that mastering your instrument is just part of being a great musician. No genre is out of bounds. An accomplished guitarist should be able to slip into any musical situation. He brought tone back into fashion in an era far more concerned with technique and technology.

He proved that the golden age of the shredder was the 1950s, not the 80s, and brought the accomplishments of people like Jimmy Bryant, Merle Travis, Charle Christian and Roy Clark back into focus for a new generation of guitarists. He gave a fledgling Joe Bonamassa guitar lessons, too.

Those inspired to find out more should check out Ralph Heibutzki’s superbly researched Unfinished Business: The Life And Times Of Danny Gatton.

Ultimately, though, it’s Gatton’s recordings that show us just what we lost when he pulled the trigger. Gatton was The Humbler, The Telemaster, the greatest of the Unknown Greats.

As a wise man once said, he comes closer that anyone else to being the best guitar player that ever lived.