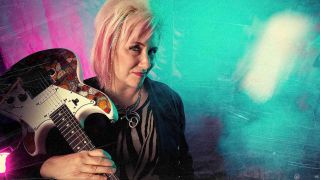 We pay tribute to the women who rock our world in Issue 246 of Classic Rock. Packed into 130 pages are articles about Joan Jett, Shirley Manson, Lzzy Hale, Kate Bush, Girlschool, Chrissie Hynde, Inger Lorre, Skin and Debbie Harry, plus interviews with everyone from Suzi Quatro to Sonja Christina, Elin Larsson and Elkie Brookes.

Below, we meet the great guitarist Jennifer Blatten.

She shredded her way into rock history as Michael Jackson’s lead guitarist, and as one of the first women to fill such a position. Before then, however, Jennifer Batten was unaccustomed to the spotlight.

After a sheltered upbringing – engrossed in Beatles records in upstate New York, where she was forbidden from joining bands by her protective mother – she headed to California to study at the Guitar Institute Of Technology (GIT, now the Musicians Institute), and landed the Jackson gig after graduating. She has since moved between solo projects, instructional DVDs, guitar clinics and collaborations, including a lauded stint with Jeff Beck, and most recently with vocalist Marc Scherer on the pair’s 80s-tastic album BattleZone.

Batten lives in Portland, Oregon with two dogs and two cats, and in her spare time dabbles in other creative pursuits such as stained glass and steampunk art.

You’ve embraced electronica, world music and multimedia performance over the years, but on BattleZone you sound like a classic swashbuckling guitar hero.

I like to keep things interesting. I was kind of at the eleventh hour asked to come in and give the sessions for this, so I flew to Chicago thinking we’d maybe do a couple of songs. In a day and a half I ended up recording four songs and writing the song Battlefield with [original Survivor guitarist/ singer] Jim Peterik.

In 1978 you were at GIT, two-handed tapping was ‘a thing’, Van Halen’s Eruption came out… What was it like learning in the midst of all that flashiness?

It was a really exciting time. During the year I was at GIT, a fellow student, Steve Lynch [Autograph] ,started tapping. That was before Van Halen hit in any big way, so his approach was completely separate. We used to get monthly seminars, and Emmett Chapman, who invented the Chapman Stick, came, and he doesn’t use a pick at all… So Steve had a seed planted from that and started experimenting. I thought it was the coolest thing I’d ever seen.

You played guitar for the world’s biggest pop star, but came from a jazzy background at GIT. How did you find the contrast?

I didn’t really give it much thought. I mean, the idea the founder of GIT [jazz guitarist Howard Roberts] had was that it was basically a technical school, so once you graduated you could make a living as a player. So we studied different styles, from classical to country, jazz and rock. So I was interested in a lot but I didn’t really know what I wanted to do. I just wanted to play music. When the Jackson thing came along, I was a fan of his music anyway and had been playing Beat It in a covers band, so it was a thrilling experience all around.

You had some very ‘out there’ stage outfits. Was there anything you refused to wear?

There was, and fortunately I did have a say. My look for the History tour came out of an S&M airbrush art book, and my costume had a ball gag in the mouth. I looked at it and said: “I really don’t want to be putting this message out to young girls.”

So what kind of message do you want to put out to young girls?

‘Skill way over looks.’ There’s such an emphasis in Hollywood on wearing next to nothing, and it feels like so many girls think they have to be really scantily clad. There’s an amazing amount of young girls coming up who are phenomenal musicians, so I think we’re getting past that a little, but men control the industry so there is pressure to wear less and less.

You joined Jeff Beck’s band in 1999. Did you experience much envy from your peers?

Absolutely. There wasn’t a lot that was said directly to me, but you can pick up somebody’s vibe, that jealousy’s in the air. I remember especially after I got the Jeff Beck gig, I was talking to a friend about this and I said: “I wonder how guys perceive me?” and he said: “Are you kidding me? They hate you!” Needless to say I don’t hang out with too many guitar players.

Presumably you didn’t get the same reception from Jeff himself?

No. Jeff is a creative soul and so he’s open to everything, and it’s amazing how many different kinds of music he’s interested in. He’ll listen to stuff that’s really out there.

Is the guitar an inherently ‘masculine’ instrument, or is there another reason why fewer women have gravitated towards it?

There was a time in history where women were the guitar players, playing parlour guitars, and that was the deal. But definitely as far as electric guitar’s concerned it’s a male-dominated thing. Especially in rock’n’roll, because it tends to be aggressive, and historically it hasn’t been thought to be ‘ladylike’ for women to be aggressive. But times are changing. Because of the internet, women from all corners of the world are able to see other women playing. I’m seeing kids that are seven years old playing amazingly. When I first started, most bands wouldn’t even consider having a woman in the band. But now you see guys wanting females in the band, which you wouldn’t have seen thirty years ago.

You can read the rest of our She Rocks! features in the latest issue of Classic Rock. Buy it online or become a TeamRock+ member to read it right now.