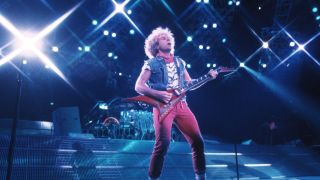 Sammy Hagar is a one-man institution. He’s fronted two of America’s greatest bands, worked with an array of musicians that reads like a Who’s Who? of rock and, at the age of 67, can still show rock stars half his age how it’s done onstage.

He’s set up his own night club, launched his own brand of tequila and entertainingly bad-mouthed everyone and anyone whose crossed swords with him during a career that stretches back to the late 60s. Yet his name doesn’t carry quite the same clout as, say, Steven Tyler. Or Ted Nugent. Or David Lee Roth.

This curious state of affairs could be partly down to the fact that Hagar has never been one to bask in his own glory. After paying his dues in such long-forgotten late 60s/early 70s Californian bands as The Fabulous Castilles, Manhole, the Justice Brothers and Samson & Hagar, he got his big break when he joined Montrose. The combination of Hagar’s powerhouse vocals and Ronnie Montrose’s incendiary guitar attack put both the band and the singer on the rock’n’roll map.

But in a taste of what was to come later in his career, Hagar butted heads with the guitarist and walked out halfway through the tour for their second album, Paper Money.

Embarking on a successful solo career, Hagar released a string of albums that chimed with the feelgood, party-hard times of the late 70s and early 80s, setting him up as a solo star on both sides of the Atlantic.

All that was rudely interrupted in 1985 when he got a call from Eddie Van Halen asking him to replace the ousted Dave Lee Roth in Van Halen. Lesser personalities might have been overwhelmed at the prospect of replacing such a larger-than-life character, but Hagar took to the task like a duck to water, and Van Halen’s biggest commercial success came while he was with them.

Inevitably, one band was too small to contain so many egos, and in 1996 Hagar either quit or was fired, depending on who you believe. While Van Halen embarrassed themselves with an ill-advised revolving- door policy when it came to singers [including a brief return for Hagar in the mid-00s], Sammy effortlessly slipped back into a solo career that has carried on successfully, regardless of shifting tastes and new trends. Recently he put together Chickenfoot and published a hugely entertaining autobiography, Red: My Uncensored Life In Rock, a gloriously salacious account of a hugely enjoyable career.

Before the release of Montrose’s self-titled debut, US hard rock played second fiddle to its British counterpart. But here was the sound of a band putting US hard rock and heavy metal squarely on the map. Guitarist Ronnie Montrose may have ostensibly been the star of the show, but this was the ideal launch pad for Hagar as both a singer and a songwriter. The frontman’s blazing Bad Motor Scooter became a staple of US radio – no small feat given that it was the first song he’d ever written. Throw in Space Station No. 5, Rock Candy and ebullient opener Rock The Nation and you’ve got one of the landmark rock records of the 70s.

Few artists would have had the balls to abandon a successful solo career to join an established band. Fewer still would fancy the idea of stepping into Dave Lee Roth’s size nines. But then Sammy Hagar has never been short of confidence. The first ‘Van Hagar’ album was the perfect calling card: a needle- sharp collection of classy songs that ranged from thumping rockers [Get Up] to catchy pop- rock anthems [Why Can’t This Be Love?] and lighter-waving power ballads [Dreams]. Arguments still rage over whether the Roth or Hagar line-up was best, but you can’t ignore the figures: 5150 ushered in VH’s most commercially successful period. It topped the US charts on April 26, 1986.

A natural-born performer, Hagar has always been in his element on stage, and his first live album was a testament to his stagecraft as well as a handy ‘best of’ collection covering his early years. Originally released in the US in 1978 as All Night Long, it was issued in the UK with a different title and sleeve to capitalise on a surge of interest in hard rock. Smart move, as it was packed with classic tunes from both the Montrose era and his own burgeoning solo career – notably Red, Turn Up The Music and I’ve Done Everything For You, the last-named popularised by Rick Springfield – as well as an impressive cover of Donovan’s Young Girl Blues.

Hagar’s sixth solo album was going to be called One Way To Rock, until a British fan introduced him to the term ‘Hampton Wick’, the cockney rhyming slang term for ‘dick’. From there the only way was up: Standing Hampton it was. Innuendo aside, the mix of aggression and studio polish helped it to become his first million-selling album. The ballsy There’s Only One Way To Rock found Hagar practising what he preached, Heavy Metal [co-written with Survivor’s Jim Peterik] was written for the bizarre fantasy film of the same name, while Baby’s On Fire and I’ll Fall In Love Again kept their end up nicely. F’narr f’narr etc.

After 1987’s more eclectic OU812, Van Halen returned wholeheartedly to their hard- rocking roots on their third Hagar-fronted album. From the acronymously provocative album title downwards, it was plastered with attitude: Spanked, Runaround and In’n’Out found them kicking out the jams with gusto, while opener Poundcake featured Eddie Van Halen utilising a power drill on his guitar. But it wasn’t all chest-beating bluster; the emotive Right Now showed that even hardened party rockers could have a social conscience, and it gave the band a smash hit single on US radio in the process.

His first solo album since leaving Van Halen was the sound of a man revitalised. Picking up where he’d left off with 87’s I Never Said Goodbye, it found him serving up energetic, good-time rock’n’roll, which toned up the middle-aged spread that had set in around his VH swansong, Balance. Slash rocked up to play on opener Little White Lie, but the real talking point was Leaving The Warmth Of The Womb, which featured the original Montrose line-up – the first time they’d played together since 1975. Meanwhile, his old bandmates were busy recording Van Halen III with replacement singer Gary Charone. One-nil to Sammy.

Aka the Red album, so called for both Hagar‘s penchant for the colour, and the album sleeve, which features him in a red suit, climbing into a red motor in front of a row of red shops [actually Stockwell Road in South London]. At the risk of labouring the point, it kicked off with the suitably fiery Red, his first truly classic solo anthem – so classic that it would spawn an unlikely cover by none other than Bette Midler. Elsewhere, Hagar originals such as Cruisin’ & Boozin’ and Rock’N’Roll Weekend jostled for space with a diverse selection of covers, including Patti Smith’s Free Money, Pilot’s Fillmore Shuffle and Paul Revere And The Raiders’ Hungry.

Eddie Van Halen was quick to lay the blame for Hagar’s departure from Van Halen at the feet of the singer and his alleged lack of work ethic. Strange, then, that Hagar’s post-VH output has been so prolific. Of the six solo albums he’s put out since then, Not 4 Sale is among the finest. With support by his tight but loose band The Waboritas, it was the work of a man who knew what he and his audience wanted, mixing the good-natured hard rock of his solo career with some of that band’s anthemic quality. Distribution problems meant it sank without trace, but it’s the undiscovered gem in his catalogue.

The prospect of a supergroup might not have the same ‘Wow!’ factor today as it used to have, but the alliance of Hagar, former Van Halen bassist Michael Anthony, Red Hot Chili Peppers drummer Chad Smith and guitar god Joe Satriani still reeked of quality. Their eponymous 2009 debut had pretty much all the ingredients in place, but this confusingly titled follow-up benefited from the cohesion that came on the back a successful tour. It’s the sort of good-time rock’n’roll which Hagar [and Anthony] specialise in, but the sense that it’s nothing more or less than four blokes in a room enjoying themselves shines through.

Where Chickenfoot got it right, Hagar’s previous supergroup, HSAS, got it very, very wrong. The union of Journey guitarist Neal Schon, Billy Idol bassist Kenny Aaronson and former Santana drummer Michael Shrieve might have looked like an 80s dream team on paper, but the reality was a disaster. Schon was apparently keen to capture the raw energy of Montrose’s debut album, but something clearly got lost in translation. Through The Fire was a supposedly live affair, and was stuffed with bland AOR and the worst cover of Whiter Shade Of Pale you’re likely to hear. At least they had the decency to leave it at just the one album.

I’ve Done Everything For You Loud And Clear

There’s Only One Way To Rock Standing Hampton

Soap On A Rope Chickenfoot