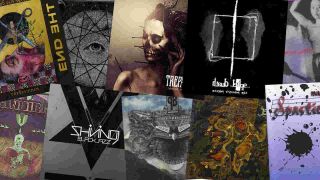 For many rock and metal fans, the merest mention of jazz makes them want to slice their own heads off. These people are wrong, of course. Heavy music and jazz have always been natural bedfellows. For a start, Black Sabbath were raised on a diet of blues, jazz and rock ‘n’ roll and if you’ve ever stood near to someone playing a trumpet or saxophone, you will know that those things are really fucking loud. Fortunately, there are many great examples of what happens when jazz and metal collide. Here are 10 of the most essential and, if we’re completely honest, the most heroically batshit records you will ever hear.

There are multiple examples of jazz and metal colliding in John Zorn’s preposterously huge catalogue of releases. After eviscerating the works of Ornette Coleman on 1989’s Spy Vs Spy, the NYC saxophonist formed Naked City and made Torture Garden: possibly the most berserk album ever made. With 42 tracks, each containing bursts of multiple genres, but powered by jazz sensibilities and a rather charming enthusiasm for the early grindcore scene, Torture Garden was released by Earache Records and fit perfectly alongside records by Napalm Death and Carcass. It still sounds fucking mad.

Not content with robustly shoving prog metal into the future with his band Watchtower, guitarist Ron Jarzombek harnessed the power of jazz for his Spastic Ink project. Joined by his brother Bobby (Fates Warning/Halford) on drums and bassist Pete Perez, Ron crammed as many notes, oddball time signatures and bewildering rhythmic switcheroos into their debut as was humanly possible. The whole 50-minute instrumental caboodle still slaps with the force of prime thrash metal but, with all due respect, Nuclear Assault were never quite this ambitious.

Candiria – The Process Of Self Development (1999)

Confirming the cherished cliché that New York City is a melting pot of musical styles, Candiria’s raging hybrid of hardcore, metal, jazz, hip hop and electronica marked them out as one of the most original heavy bands of the ‘90s. It all came together brilliantly on their third album, wherein jazz’s freewheeling ethos provides the glue holding the epic, complex like of Temples Of Sickness and Three Times Again together. An unsung masterpiece from a true cultural epicentre.

Davide Tiso’s perma-skewed metal mob first emerged as a woozy, left-field black metal project. By the time their third album arrived, the Italians had mutated into an unstoppable jazz-metal wrecking crew. Delivered at full pelt and powered by drummer Davide Piovesan’s air-tight grooves and vocalist Luciano Lorusso George’s swivel-eyed shrieks, The Painter’s Palette gave birth to a new kind of jazz fusion: one as likely to incite a circle pit as it was to cause an outbreak of beard-stroking.

Electric Masada – At The Mountains Of Madness (2005)

Very much not for the faint-hearted (at least not in its 157-minute entirety), At The Mountains Of Madness is one of the most insane records ever made. Comprising two complete live performances by John Zorn’s Electric Masada project, recorded in Moscow and Ljubljana, Slovenia, in 2004, it’s the sound of jazz souped-up and overdriven to life-threatening intensity levels. With a line-up featuring jazz luminaries Marc Ribot and Jamie Saft, electronic guru Ikue Mori and ex-Mr Bungle bassist Trevor Dunn, Electric Masada could easily have been a bit too cerebral and arty for metalheads. Instead, they may have been the most ferocious live band of all time.

After a trio of albums that belonged firmly in the world of acoustic jazz, Norwegian maverick Jørgen Munkeby transformed his band into something far more extreme. Shining’s fourth album owed equal amounts to The Dillinger Escape Plan and Miles Davis. Songs like deranged opener The Madness And The Damage Done and the genuinely terrifying Blackjazz Deathtrance were fuelled by the spirit of chaotic improvisation, as Munkeby’s squealing sax battled furiously away amid an eruption of wonky riffs. These days they play radio-friendly alt-rock. Funny old game, isn’t it?

Formed by classically-trained guitarist Jan Zehrfeld in Munich in 2004, Panzerballett could be the definitive jazz-metal band, such is the seamless brilliance of their genre-juggling. Fond of mind-bending cover versions that twist their source material into perverse new shapes, the Germans’ devastating ensemble precision makes them the match of any straight-ahead metal band. All their albums rule, but Tank Goodness is the heaviest and most unhinged of the lot. Check out the band’s version of (I’ve Had The) Time Of My Life if you don’t believe us.

Cult heroes in their native France, Trepalium have long been masters of the bendy, polyrhythmic riff. Jazz has always been a strong presence on the band’s records, but this 2014 EP showcased a more overt and celebratory combining of key influences. Madder than a syphilitic wolverine but explosive, infectious and funny, too, Voodoo Moonshine sounds like the work of a malevolent New Orleans bar band in some horrific dystopian future. But more fun.

In the world of synapse-melting avant-garde and experimental music, Michigan saxophonist Colin Stetson is something of a big deal. No stranger to music with an extreme edge, he took a full plunge into the metal underground by forming Ex Eye: an improvisational noise rock trio that will pin you to the wall and make your ribs ache. Their eponymous debut veered from euphoric post-metal ambience to tooth-dislodging noise, with Stetson howling, parping and screeching away at the eye of the storm. Jazz as fuck, mate.

Extra proof that heavy music and the saxophone are plausible bedfellows, Swedish saxophonist Mats Gustafsson has been scaring the shit out of jazz fans for years. Of all his recent endeavours, noise-rock project The End must rank as the most metal-friendly. A collaboration with various avant-rock luminaries and Ethiopian-born experimental vocalist Sofia Jernberg, it’s an untamed barrage of freeform scree, morose melodies, skittering Afrobeat rhythms and harrowing, maxed-out crescendos. Play it loud and wait for the neighbours to hate you.