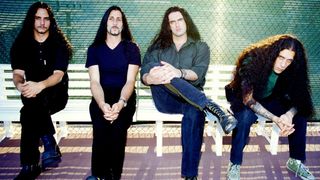 New York has a hell of a legacy when it comes to music. Punk, disco, the Broadway musical… all can rightfully call The Big Apple home, while New York State itself has a rich and diverse musical heritage. And while it may not be the birthplace of metal, it’s thrown up its share of classic metal bands over the years.

Whittling it down to the 10 best metal bands from New York is no easy task, so we’ve imposed some rules on ourselves to try and make it as easy as possible. As the title suggests, we’re sticking to metal bands – so no hard rock legends (Kiss, Blue Oyster Cult) or NYHC outfits (sorry, Agnostic Front and Sick Of It All), otherwise we’d be here all day.

With that in mind, here are the 10 best metal bands from New York…

One of the most unique bands in the history of metal, Type O Negative became one of the least likely million selling bands ever thanks to their uncanny knack of melding sombre, doomy, goth-tinged riffs with soaring, unescapable melodies. This bizarre meld saw them given the nickname ‘The Drab Four’, thanks to their Beatles on downers vibe. But their star man was undoubtedly their frontman; the late, great Pete Steele. A man with a dry wit and rich vocabulary, as well as a hulking frame.

As card carrying members of thrash metal’s Big Four, Anthrax would easily stride onto any list of New York’s greatest musical achievements. Throughout their career they have hopped gleefully around the sub-genres, taking in their hometown’s love for punk rock and hip-hop to become one of metal’s most revere boundary breakers. Just take a look at that back catalogue; Caught In A Mosh, Indians, I Am The Law, Madhouse, Got The Time, Bring The Noise… You can’t mess with that can you?! That they are still doing it to this day, and can still blow most bands half their age offstage while doing it, only adds to the level of respect we have for Anthrax.

Whilst they might be most commonly grouped in with the late ’80s Floridian death metal boom, due to their work with producer Scott Burns at Morrisound studio, Cannibal Corpse were born in Buffalo, New York. And if the success of Type O Negative was a bit of a shock, then the idea of a completely melody free, utterly brutal death metal band that specialise in the most stomach-churning lyrics and imagery ever seen in music going on to become million sellers and Hollywood movie stars is like something from an alternate universe. It happened though, and what a beautiful thing that is.

While many people think that nu-metal is a bit laughable these days, the early idea of the genre, ultra-low, staccato, groove laden riffs pulverising you into submission, is still a good one. And while Sepultura, Anthrax and Rage Against The Machine may get all the credit for creating its blueprint, the one band that arguably deserve all the praise for the best things in nu-metal are New York’s Helmet. Their three album run of Meantime, Betty and Aftertaste is near perfect, influenced everyone from Glassjaw to Deftones, and feature some of the most incredible rhythmical guitar grooves ever committed to tape thanks to genius guitar god frontman Page Hamilton.

Again, although most people associate early death metal with Florida, it was a fertile breeding ground in New York. And Suffocation might just be the best of the bunch. Since 1988, save for a little half decade break in the late 90s, they’ve been one of death metal’s most consistent bands. Not only do they have some mindboggling technical riffs and one of the genres most instantly recognisable vocalists in Frank Mullen, their use of breakdowns was hugely influential in the creation of the deathcore movement… we’ll let you decide if that’s a positive or a negative.

He might be a massively successful solo artist and Hollywood director in his own right these days, but Rob Zombie could not have got there if it wasn’t for the incredible career he forged in White Zombie. Starting life as a bizarre art-punk project, the band slowly but surely began to find their sound by stirring metal riffs, electro industrial throbs and cartoonish b-movie personas into their sonic pot. The end result was the stunning Astro Creep 2000… swansong in 1995, by which time they were one of the biggest bands in America. Rob has never looked back… or been quite as good.

As a former member of Anthrax, bassist Danny Lilker has already made it onto this list once, and in Nuclear Assault and SOD a couple more could have made it in here too, but we’re going to plump for his most extreme work as a member of Brutal Truth as the bassist’s second entry. The reason? Take a listen to the band’s fourth album Sounds Of The Animal Kingdom. Even though grindcore had already been well established by this point, SOTAK ups the intensity and quality levels to wonderful new heights. Plus, since the BT’s reformation in 2006 they have brought out two new albums that still piss on the competition like it ain’t no thing.

They might be about as cool as a vindaloo left in the desert, but even if you’re not a fan you can’t deny the impact of Dream Theater. In the era of grunge they swam against the tide to sell millions of records, by playing lengthy, flamboyant, conceptual, progressive metal. It made them one of our biggest cult bands, with a devoted fanbase that hang on each note that rings from John Myung’s six string bass. And with good reason, they’re technically perfect, can write albums as taxing and involved as the stunning Metropolis Part 2: Scenes From A Memory and, come on, even the grumpiest DT hater must secretly nod their head along to Pull Me Under.

One of the great lost metal bands, not just from New York but from anywhere. Candiria came out of the underground in the late 90s and sounded like no one else. The mix of technical metal, hip-hop, jazz and hardcore that can be heard on 2001’s 300 Per Cent Density should have put them in the same league as The Dillinger Escape Plan and Sikth as one of the new millennium’s most ground breaking acts. Instead they were plagued by rotten luck and a changing musical climate, they vanished for years before recently regrouping for this year’s excellent comeback album While We Were Sleeping. True visionaries that deserve far more than they’ve got thus far.

So this is a bit of a weird one. We did say no hardcore bands, and Bad Brains were formed, and are mostly associated with Washington DC. They are in this list all the same though, due to their relocation to New York, the massive impact they made on its hardcore scene and, most importantly, the hugely eclectic strides they made in their music after settling in The Big Apple. Check out the difference in the hardcore punk prototype of their self-titled 1982 debut and the funk-metal hybrid of the classic I Against I four years later for proof of the band that Bad Brains burgeoned into thanks to their time in New York.