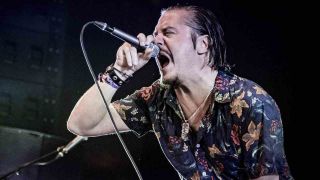 Mr Bungle have released a cover of The Exploited’s USA – the first new material from the band since 1999.

The current lineup features Mike Patton, Scott Ian, Dave Lombardo, Trey Spruance and Trevor Dunn, who have revealed that 100% of profits from the track will go directly to the MusiCares COVID-19 Relief Fund, which is raising cash to help music creators who are struggling financially due to the pandemic.

In addition, Mr Bungle are also selling an exclusive t-shirt which will only be available through July 4, with proceeds again going to the fund.

Guitarist Spruance says: “Doesn't matter what part of the political spectrum you are on, everyone at some point has said, ‘Fuck the USA’. The closest thing we have to a universal sentiment."

The single has been released through Ipecac Recordings, with co-owner Greg Werckman adding: “This is a song that resonates and speaks to the country that Ipecac calls home. Over 100,000 US citizens are dead from the pandemic. At the same time protective masks have turned into a political football and no one has a grasp on testing.

“We need to do a better job of looking out for each other. MusiCares looks after all of us in the music community.”

Ipecac Recordings will also be donating the label’s proceeds from the single to the fund, with the track now available through various platforms.

Mr Bungle reunited earlier this year for three shows in Los Angeles, San Francisco and New York, where they performed their 1986 demo The Raging Wrath Of The Easter Bunny in full.