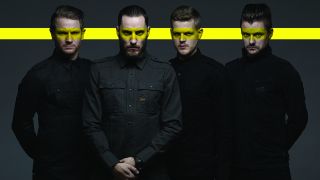 In the dark corners of the internet, a movement is rising. Its signs are yellow-and-black flags declaring ‘For Excellence’, and a triangle logo with the point facing downwards. They call themselves the International Blackjazz Society, and the only way to gain entrance is to ‘hunt for signs and riddles’.

The people behind it? Norway’s inscrutable Shining collective, founded by jazz musician Jørgen Munkeby. In 2010, they released their fifth album, Blackjazz – a dark fusion of jazz and metal that twisted riffs into esoteric shapes and featured their signature saxophone up front and centre, and could be experienced more viscerally through 2011’s DVD Live Blackjazz. They followed it up with the more industrial-tinged One One One, but their latest album, International Blackjazz Society, puts their self-created genre at the forefront again.

“There’s an album that [American composer] Ornette Coleman released in the 60s called Free Jazz that started an entire movement in jazz,” begins Jørgen. “Then there was an album by Venom called Black Metal – a defining album that lead to the invention of black metal. So those two albums and those two names have led to what we now call our music.”

But it’s more than just music – it’s an entire insular world. Shining have set up the website Blackjazzsociety.org to tempt the curious in. With its black background, yellow lettering and stark symbolism, it looks and reads like the mission statement of a cult, with numerous references to promoting ‘cultural excellence’ and a series of militant rules and propaganda pieces. It goes beyond a marketing campaign – the Norwegian innovators are aiming to start a grassroots International Blackjazz Society community.

“Every musical movement needs a scene,” ruminates Jørgen. “I recently watched the Sonic Highways documentary [created by Dave Grohl] and there was a guy in America, I can’t remember where it was, and he said that they were trying to start a whole new type of music but that there was no scene. And so we wanted to create a community for people that like blackjazz. You need venues, and fans, and an established musical sound. And we wanted to be able to set the scene for those people to come together – that’s the big idea for blackjazz. People being able to unite through the music they like.”

While it’s a noble and far-reaching goal, the logistics of joining or participating in the International Blackjazz Society are still unclear. Some of the details were hammered out during their recording sessions in Oslo, and now, with his vision up and running, Jørgen is happy to step aside and have the faith in the people to carry on building the International Blackjazz Society… no pressure, folks.

“It is ambitious, yes,” nods Shining’s fearless leader. “We didn’t exactly know what this thing, the International Blackjazz Society, was going to be. Was it a fan club? Do we lead it? Do we choose the bands that are a part of it? We had to think about these things. So towards the end of the recording of the album, we started to put down these ideas of what it would look like, which in turn helped influence the sound and feel of the album, and it began to grow the mythology. Now we have people that pledge to the society, that wear the artwork like a badge of honour, and they have taken it on even further. So it’s not just for us to control – the people will decide where the International Blackjazz Society goes.”

Rather than a scene that grows organically through bands influencing each other, the International Blackjazz Society has more in common with black metal of the 1990s, where bands such as Mayhem concertedly disseminated ideas about their sound and aesthetic. Whether or not blackjazz constitutes a new movement in metal yet, it’s too early to tell.

“Hmmm… it’s easier to evaluate these things in retrospect,” Jørgen reasons, when asked if Shining are succeeding in their ambitions. “When there has been 10 or 20 years between it, then it’s easier to see the content of what really happened. When you’re in it? It just looks like a mess. I’m sure that’s what people were saying when hip-hop was established. I know that’s what people were saying when black metal was established, because I was there. But some of it is tongue in cheek – we’ve made world maps with the flag dotted over it. You know, world-domination charts – how blackjazz is going to spread around the world until the Earth is all covered in black.”

Jørgen smiles at the idea for a second, before switching tone. As the head of Shining’s collective, he’s nurtured their sound for years, and has given much consideration to the way it’s constructed and presented.

“The music, on the other hand, is very serious,” he says. “When I was a child, I always liked music that was for the listener. Music that needed to be listened to and would challenge you; music that was involving. I don’t like music that is made to sell fucking Coca-Cola! So when I grew up, that was my ambition – to make music like this.”

Produced by Jørgen himself, International Blackjazz Society is no easy listen, but among the white-hot noise and off-tempo, avant-garde sax-blowing are new hooks and instantaneous riffs in the vein of Nine Inch Nails or Marilyn Manson. Oddly, for an idea that has zero mainstream commercial potential, Shining’s meld of black metal and free jazz is beginning to sound more accessible, and they were recently played in a daytime slot on Radio 1. Could Shining be the most unlikely success story in metal history?

“Well, different people have different ideas as to what is success,” comes Jørgen’s measured reply. “To some people, it is simply selling a lot of records or selling a lot of gig tickets. Other people might think that it is creating something important, while others might think success is getting into Heaven after you’re dead. But our vision is a lofty goal: to become a part of the fabric of musical history.”

Throughout our conversation, Jørgen frequently returns to those towering ambitions. His words are filled with passion and drive, although, much like the International Blackjazz Society itself, little is known about him, aside from his musical endeavours. You can’t help but wonder who this man is when he’s away from Shining.

“My time away from Shining?” he repeats back to us in a voice that suggests we’ve just asked him something utterly absurd. “I don’t know what that is. There have been so many people that have been through our collective that I have to take full responsibility for everything we do. I am the driving force. I hope to get some time away, maybe, one day… I used to do martial arts. I would quite like to be able to go back to that.”

That energy and physical commitment of combat is something Jørgen channels into Shining’s gigs. Bright lights bounce off the singer’s smart black clothes as he sings while staring intensely into the crowd, or stalks the stage with saxophone in mouth. With Shining heading over to the UK this month – completed by drummer Tobias Ørnes Andersen (Leprous, Ihsahn), long-standing guitarist Håkon Sagen, keyboardist Eirik Tovsrud Knutsen and new bassist Ole Vistnes (Tristania) – there will be a chance to experience this world of blackjazz and its following with your own eyes.

“Our live shows give me the same kind of feeling that I used to get when I was sparring,” Jørgen tells us. “I get to test my physical limits, in a way. There are lights flashing and you have to stay on your feet and you are breathless and you have to perform the techniques correctly. So music, for me, it fills that gap where everything else used to be.”

In other words, it’s all-consuming. Jørgen has channelled all his energy into achieving the band of his dreams, never allowing himself to fail. “Inspiration and creativity,” he muses enigmatically, “is not only a gift. It is a skill. Too many people give up, or don’t work hard enough.”

Welcome to a band and a community that are committed to challenging the limits of music. If you have the vision and the drive, the International Blackjazz Society needs you.

*INTERNATIONAL BLACKJAZZ SOCIETY* IS OUT NOW VIA SPINEFARM. SHINING TOUR THE UK THIS MONTH