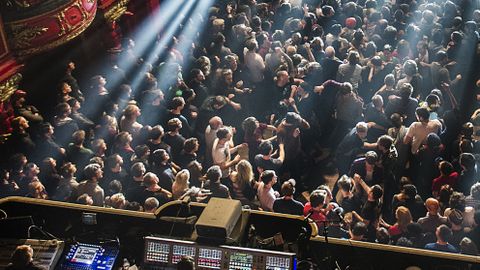 Prior to his tenure as Poet Laureate to the Crimson King, Richard Palmer-James was Supertramp’s wordsmith and guitarist. A solo acoustic/vocal set-up eases us into this DCB album launch party. His fingerpicking style modulates between the spiky (Guano Blues) and the elegiac (Half-Remembered Summer). The stripped-back format highlights the evocative eroticism and cinematic poetry in the Crim classic Easy Money, all the more poignant for being sung by the author. It’s rare treat in an enjoyable set.

After a brief interval, David Cross manipulates his pedals and loopers to duet with Robert Fripp’s disembodied soundscapes on an excerpt from 2015’s Starless Starlight album. His electric violin searches out the haunting Starless theme, its tone probing and alchemising the air. It’s mesmeric, captivating a rapt crowd.

Ex-VdGG man David Jackson joins for an improv duo. Blasts of that dual tenor and alto-sax alternate with fluid soprano lines on Axis Shattered, into which he drops quotes from VdGG classics.

Sure Of The Dark marks a return to Starless Starlight. The violinist laughs off Jackson’s refusal to play its theme backwards as intended. He couldn’t resist rendering such a beautiful melody as it was originally composed.

Craig Blundell (Steven Wilson, Frost*) heralds the David Cross Band with an intricate yet explosive drum solo, before the sextet revisit Nurse Insane from 1992’s The Big Picture. The prog metal is in stark contrast to what has gone before and is initially jarring, requiring some acclimatisation.

Tight and frenetic, they power their way through new songs Starfall and Sign Of The Crow. The Pool and Rain Rain, the latter with its pizzicato intro, display more subtlety and dynamics, leaving space for exploration on violin, guitar and brass.

Crimson’s Exiles is given a shot of adrenaline, while witnessing the inclusion of Jackson’s lamentations, shrieks and bellows in the ubiquitous Starless and 21st Century Schizoid Man is a bucket-list privilege.

Cross insists he’s merely the violinist in the DCB but such modesty doesn’t do justice to his role in a night of extraordinary diversity and talent, heavenly bodies orbiting his star.

The A To Z Of Prog: Quiz - King Crimson, Kayak, Karmakanic, Knifeworld, Khan