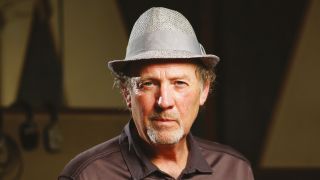 David Cross started 2015 with three ambitions. First of all, he was keen to release his collaboration with former bandmate Robert Fripp to the public. Said collaboration, the Starless Starlight album, was released earlier this year to a great response. Secondly and thirdly, he wants to put out music from the Cross-Jackson Quartet and the David Cross Band, and both projects are in the pipeline. Cross also lectures at London’s Metropolitan University, which means he’s directly influencing future generations of musical minds. And they’re influencing him…

Where did the idea for Starless Starlight come from?

Every so often Robert Fripp gives me soundscapes that I work on and turn into tunes. In 2006, I asked him if he had any that might be of interest and he sent me two. They were Starlight 1 and Starlight II. Then I spent so long in developing these that they only really came into focus when Tony Lowe came into the project as a co-producer to help bring it all together. You can get so locked into music that you can’t see the wood for the trees. Thankfully, Tony saved me from myself. What I was aiming for was music that was warm yet dark. Something that drew you in, yet also had a certain distance. I think that’s what you hear.

Did Fripp get involved?

Well, he’d listen to material we’d send over to him and make encouraging comments, but that’s as far as it went. I don’t think he was prepared to get out of bed to do anything like playing on the album!

You’ve performed the album live already. Any plans to do a more extensive tour?

If there’s a demand, then yes. What we do live is not only play the album, but each member has the responsibility for three other compositions they bring into the band. We love to be spontaneous, not merely to repeat what you can hear on an album. That keeps it interesting for us.

You haven’t done anything with the David Cross Band since 2011. Why not?

I could ask you that! We’ve had nobody express any interest in booking us. No one seems to care about the band. Maybe somebody else can explain why there’s no interest in what we do. And playing in England is just so depressing for this band. We can go to other countries and get treated so well. Here, the sound at gigs is awful, the conditions are bad. And I’m not prepared to put these musicians through such a bad experience again. They deserve better.

There is a new album recorded – it’s been ready for a few years – but there’s no point in just getting it out because without proper promotion, who would listen to it? However, I am determined this will come out in 2015. I just owe it to everyone concerned to make sure it’s done properly. The guys I work with in the David Cross Band should be acknowledged, not to have their efforts dismissed. One way or another, we have to build a fan base from nothing.

The third of your planned projects for 2015 is with David Jackson, the Van der Graaf Generator saxophonist, isn’t it?

Yes, we will release an album this year as well. Right now, the band’s called the Cross-Jackson Quartet, but that might change. Our problem is that while this is a jazz-rock instrumental band, we have come up with a few chants, the sort that will hopefully encourage audience participation. It’s nothing we’d want to do with a proper vocalist, but it’s a case of working out where these chants fit in. I tried to get Pete Sinfield to write some chanting-style lyrics, but I don’t think he quite got what we’re after. However, if it comes off, then the relationship between the audience and the band will take on a new dimension, because the fans would become a crucial part of the performance. At the moment, though, we’re still developing the concept.

You played live with the Stick Men (Pat Mastelotto, Markus Reuter, Tony Levin) in Japan recently. Any chance you’ll play with them again?

That was one of the most enjoyable things I have ever done. I didn’t meet the guys until we all landed at Osaka Airport from different flights. So, it was a little nerve-wracking getting everything together. But those four dates I did with them were so special. They kept challenging me, to see if I could keep up with what they were doing. I passed those tests. It was also the first time in years I’d played keyboards live, which surprised them. They had no idea I knew my way round a keyboard.

There’s a live album from that tour due out in the summer, called Midori. As for any future performances with Stick Men, well, I’d love to do some, but it’s down to whether our schedules coincide. If they ask me, and I can fit it in, then I wouldn’t hesitate.

**You must have collaborated with so many musicians over the years. Are there any recordings hidden away that you might yet put out? **

I’m sure I have loads at home somewhere. One that does come to mind is with the late Pete Banks, Yes’s original guitarist. We got together one day for a jam and he was astonishing. Honestly, I couldn’t keep up with what he was doing. Pete would begin something, but by the time I’d worked out what he was up to, he’d moved on. It was a big experience for me. I’ve got that tape hidden away. But who knows? Perhaps one day that will get released.

You’ve lectured on music for a long time now. Do you ever jam with students?

All the time. That’s one of the things I love doing. You never know what might come out of a jam session with anyone. Sometimes the most wonderful ideas can come through from playing with people you might call amateurs. They haven’t been playing for long enough to get bogged down in the rules of what you supposedly can and cannot do in music, so they’re game to try anything fresh. You have no idea how inspiring that can be until you’ve been there.

_Starless Starlight is out now on Noisy. For more information, see http://www.david-cross.com. _