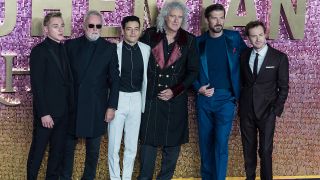 Roger Taylor says the possibility of a sequel to smash hit Queen and Freddie Mercury film Bohemian Rhapsody is unlikely as they “wouldn’t want to be seen as cashing in again.”

Bohemian Rhapsody is the biggest music biopic of all time and scooped four Oscars, two Golden Globes and two BAFTAS, with rumours rife last year that a sequel could be on the cards.

However, earlier this year Brian May appeared to pour cold water on the idea, telling Rolling Stone: “Don’t think we didn’t think about it. We’ve talked. Basically we think not at the moment. Things could change, I suppose, but I think it would be difficult.”

Now, in a new interview with Rolling Stone, Taylor was asked if they had any initial ideas for a sequel.

The drummer replies: “I have to say no. I really do think that we need to sit back for a year or two and look at things and see if that is a believable or credible thing to do.

“The movie was a great hit. We were delighted, obviously, but I think I wouldn’t want to be seen as cashing in again. I’d have to have a very, very good script and scenario to make that work. Right now, I can’t think of a way of doing a sequel.”

When it was put to him that Queen’s final tour with Mercury in 1986 and the “the final years of his life were very dramatic and eventful,” Taylor says: “That is true. That is post-Live Aid."

He adds laughing: “If somebody comes up with a genius plan, maybe we’ll think about it! Right now, we’re just very happy with what the movie did. There are so many sequels that don’t match up to the original one.

“There are obvious ones that did, but on the whole, I think it’s a dangerous territory.”

Earlier this month, Taylor said he believed Queen would still be making music together if Mercury was still alive – but wasn’t sure if estranged bassist John Deacon would have been involved.