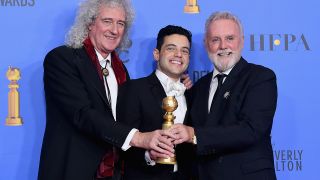 The film, which has become the biggest-selling music biopic of all time despite only going on general release in November, picked up the award for Best Motion Picture - Drama at the ceremony at the city's Beverly Hilton.

And its lead star Rami Malek, who played iconic frontman Mercury, was also celebrating after his performance won Best Performance By An Actor In A Motion Picture - Drama.

In his acceptance speech, Malek thanked “everyone who worked so tirelessly to make this film,” adding: “And, of course, to Queen.

“To you, Brian May, to you, Roger Taylor, for insuring that authenticity and inclusivity exists in the music, in the world and in all of us.

“Thank you to Freddie Mercury for giving me the joy of a lifetime. I love you, you beautiful man. This is for and because of you, gorgeous.”

Bohemian Rhapsody had been in development hell for years, leading many to believe the film would never see the light of day.

Sacha Baron Cohen was originally scheduled to play Mercury, but exited the project acrimoniously in 2013. Malek was then chosen for the role in November 2016, but, as everything seemed to be falling into place, director Bryan Singer was fired in December 2017, with Dexter Fletcher stepping in to complete the film.

Malek is joined in the cast by Gwilym Lee as Brian May, Ben Hardy as Roger Taylor, Joe Mazzello as John Deacon, and Lucy Boynton as Mercury's lifelong companion Mary Austin.