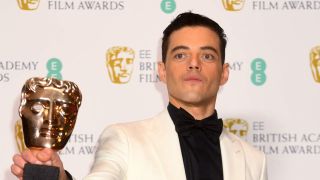 Queen's Bohemian Rhapsody movie has won two awards at this year's BAFTA ceremony in London. Rami Malek won the Best Leading Actor award for his portrayal of Freddie Mercury, while the film also picked up the prize for Best Sound.

In accepting his award, Malek said, "Thank you so very much to Queen. To Brian May, to Roger Taylor, to the entire Queen family. I wouldn't be here without you. And to the greatest outsider of them all, for being so unwavering and unflinching and uncompromising in every which way: Thank you Freddie Mercury again."

Bohemian Rhapsody had been nominated for seven awards, but lost out in the Best Film category to the Netflix drama Roma.

The ceremony took place at London’s Royal Albert Hall. Queen's Brian May was in attendance, accompanied by his wife, actress Anita Dobson. Roger Taylor attended with his wife, actress and producer Sarina Potgieter.

Bohemian Rhapsody will be released on DVD, Blu-ray and on 4K digital on March 4 via 20th Century Fox Home Entertainment.