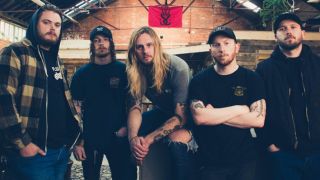 While She Sleeps have teamed up with Bring Me The Horizon’s Oli Sykes for their new track Silence Speaks.

The song features on the band’s upcoming third album You Are We. It was recorded at a home studio in Sheffield, UK, called The Barn and will launch on April 2. It was funded entirely through PledgeMusic after the band decided to leave Sony Music last year.

Hear the track below.

Vocalist Lawrence ‘Loz’ Taylor said: “There’s always been a very DIY aspect to this band so going it alone a bit more now just reiterates that to everyone.

“The Barn was a very important place for us – it’s where we grew as friends and it was where we hung out and could be creative – so the idea with this new space is that it gives us a lot more creative space.

“There’s a studio and live room, and we have space now to achieve what we want to achieve as a band. This place is going to house us for a good few years.”

Regarding their decision to explore a PledgeMusic campaign rather than stick with an established label, guitarist Sean Long says it was a natural choice for the band.

He said: “Now more than ever, our fans know that it’s them making all of this possible for us. The divide between artist and fan is ridiculous, because there are no fans without the artist and there’s no artist without the fans.

“They go hand in hand together as one absolute thing, and I really like that we can see that in play with what we’ve been doing. It’s very reassuring to see that support right in front of us.”

While She Sleeps have also added three album release shows to their UK and Ireland tour, which gets underway in April. See their full tour itinerary below, with the new dates highlighted in bold.

You Are We is available for pre-order through the band’s PledgeMusic page.

While She Sleeps UK and Ireland tour dates

"My voice sounds phenomenal": While She Sleeps join us from the studio