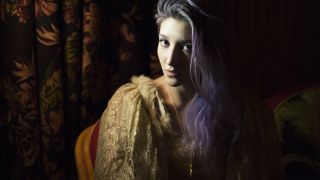 Queen Kwong are an LA-based band led by Carré Callaway, a singer who was discovered by Nine Inch Nails’ Trent Reznor when she was just 17.

Sultry and sinister in equal measure, the band – whose line-up includes Limp Bizkit guitarist Wes Borland, former Marilyn Manson bassist Fred Sablan and AWOLNATION drummer Hayden Scott – perform music which glowers with attitude and is often paired with disturbing video visuals. It might not be loud in the traditional sense, but it certainly packs a visceral, primal punch. Ahead of the band’s debut London shows later this month, we spoke to Callaway about her musical journey which began on a hot day in Louisiana…

LET’S START WITH TRENT REZNOR DISCOVERING YOU. HOW DID THAT HAPPEN? “That was really weird. I just met him randomly when I was about 17 in New Orleans. I was kind of a punk kid back then and I was just like, ‘I play music too!’ And he said ‘Well, why don’t you play me some music, then?’ So I did and it started from there. We really connected with it and I went out to LA and started working with him out here. I ended up opening for him a few times. It’s strange.”

**HOW DO YOU JUST MEET TRENT? **“I was eating a snow cone on the street and it was maybe a block or so from what I guess was his studio.”

**DID YOU FEEL THE WEIGHT OF EXPECTATION ON YOUR SHOULDERS? **“I did at first, but definitely not any more. Because what I do, and what I’ve always wanted to do, is so different from what he does. So he turned more into a father figure than a musical peer. He does his thing and I do mine, so I don’t really feel any pressure from it. His audience isn’t my demographic really, so I don’t have to worry it about too much.”

**WHY DID YOU TAKE A COUPLE OF YEARS OUT FROM PLAYING? **“It was after I opened for Nine Inch Nails the first time. I was pretty overwhelmed. I guess that was the period of time when I did feel that pressure and it was just this realisation that people were expecting something from me that I didn’t even want to participate in. I didn’t want to be making quote-unquote goth music or be part of that scene, and people were really harsh on me for that. It’s like being criticised for something you don’t even want to do. Like you’re not good at something that you aren’t even trying to do. So I felt really weird about it and I kind of wanted to re-establish my identity – you know, figure out what that is and actually, after spending some time really figuring out who I was as a musician and what I wanted to do, then I came back and started playing shows as Queen Kwong. But during those two years I was feeling kind of down about it. It was strange to be that age and be kind of confused, because it’s like ‘Oh, you have this huge opportunity with Trent Reznor and this is the time to really get on it and go for it’, but it really wasn’t what I wanted to do creatively.”

BUT YOU CAN’T HAVE REGRETS ABOUT THESE KIND OF THINGS, BECAUSE IF YOU HADN’T TAKEN THAT TIME OUT, THEN MAYBE YOU WOULDN’T BE HERE NOW DOING WHAT YOU’RE DOING. “It took me a while to realise that, because of course some people were like, ‘Oh, you missed the boat’. Which is funny, because I opened for him as Queen Kwong years later. But it was ‘You missed your opportunity’ or ‘You missed your big break’ so for a while I was kicking myself. And then for a while I regretted doing it at all, like ‘Why did I even put myself in that position?’. But now I’m totally fine with everything. I think that was just part of growing up and having something like that happen and it being kind of strange ad being torn between ‘This is a huge opportunity, you should be doing this’ and my heart not being in it.”

**SO HOW DID WES BORLAND GET INVOLVED WITH QUEEN KWONG? BECAUSE HE’S OF A SIMILAR ILK TO NINE INCH NAILS AND DOESN’T NECESSARILY SEEM TO GO TOGETHER WITH YOUR MUSIC EITHER. **“We have a bunch of mutual friends, but we’d never met in person, but we knew of each other. We first met because I started getting really into making music videos about a year and a half ago and I started having success with that. It was something I was really interested in for a while and I still am, but I was really obsessed with it back then. I was more interested in making music videos than I was in making music and so I was talking to Wes online, emailing back and forth, about making some sort of music video together or working on something together visually. So we met and we started talking about working on other stuff, and that’s kind of how it all started. Then I sent him a really old song of mine, Strange Fruit, and he asked if he could remix it, which he did, and it turned out being really great. Everything he did was just so spot on and perfectly aligned with what I wanted. He really took the song to a different place.” YOU’VE JUST FINISHED RECORDING YOUR DEBUT FULL-LENGTH. WHAT ARE YOUR PLANS FOR IT? “I’ve pretty much only ever relied on myself and up until this point I’ve only really wanted that, because I felt like I was in control and could be creative in all ways and not have to rely on other people. I recorded my last EP [Bad Lieutenant] in a really small bathroom in New York City with my guitars and my laptop. It was the perfect example of DIY. And nobody knew about it. My few hundred or few thousand fans knew about it, but nobody knew about it outside of that. And it’s hard not having any kind of buzz or PR pushes or any money to tour for it. That’s where it becomes hard as a DIY artist. So for the record I just made I would rather have help in pushing it, because I don’t want it to go unheard. What I’m trying to do right now is just find a home for it, whether it be a label or another way to distribute it, because I’m really proud of it and I think it has potential to really change things up.”