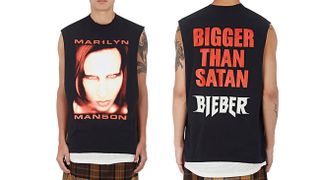 Justin Bieber has released a t-shirt featuring an image of Marilyn Manson and the slogan “bigger than Satan” – for which fans will have to fork out almost $200.

The top is an exact replica of one pop star Bieber has been wearing on stage on his recent Purpose tour dates and he’s now selling them to fans via Barneys New York at $195 each.

Earlier this year, Manson got wind that Bieber had worn one of his t-shirts and responded by posting an image to Instagram of him wearing a Bieber t-shirt, along with the caption “bigger than Bieber.”

The Canadian pop singer and the self-styled God Of Fuck later went on a night out together in LA.

Barneys says: “This Purpose tour XO Barneys New York black enzyme-washed cotton jersey sleeveless T-shirt printed at front with Marilyn Manson graphic and at back with red and white ‘Bigger Than Satan Bieber’. This style is part of a selection of highly coveted items inspired by Justin Bieber’s world tour.”

The retailer adds that the item is “excluded from our general return policy and is a final sale. No refunds or exchanges will be issued, regardless of condition or packaging.”

Marilyn Manson this week revealed that his 10th album will be named Say10 and released on Valentine’s Day, 2017.

Justin Bieber's Sorry in the style of Limp Bizkit, FFDP, Kiss and more