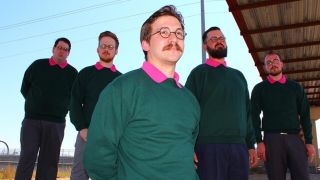 The five-piece say the that 75% of lyrics on the album consist of quotes from the left-handed pillar of the Springfield community – and it was recorded in Mesa, Arizona, in May of this year.

In the video for White Wine Spritzer, the band gang up on one of their own when he turns his nose up at a refreshing alcoholic drink.

On the album, lead singer Head Ned previously said: “When we recorded Howdilly Doodilly, our only goal was to make a record that was really brutalino.”