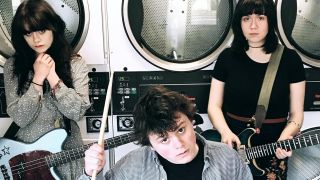 Skating Polly have released a video for their new track Queen For A Day.

It’s been taken from the US outfit’s upcoming album The Make It All Show – with the song and video featuring guest vocals from Exene Cervenka of X.

The album will launch on May 4 in North America and on May 11 across the rest of the world via El Camino Media.

Speaking about the new single, Skating Polly’s Kelli Mayo says: “The lyrics for this song came from a conversation we had backstage with Exene about the old game show Queen For A Day.

“The premise of the show was that women with tragic stories – sick children, dead husbands, poverty, etc – would compete against each other for applause from the audience. The winner would get a washing machine or whatever household prize they asked for and be crowned Queen For A Day.

“Months after this conversation, Exene sent me lyrics in a text and we wrote the song around them. She’s singing on the second and third choruses too.

“We wanted the video to emulate the old show but also look like it was directed by John Waters.”

Skating Polly will head out on tour across North America later this month. Find a full list of live dates below, along with the cover and and tracklist for The Make It All Show.

Skating Polly The Make It All Show tracklist