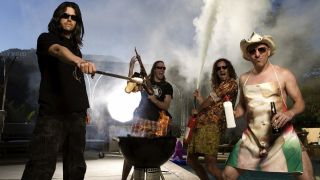 Tool have debuted two songs, Descending and Invincible, presumably from their long-awaited upcoming album. The songs were premiered during the band's headline set on the final night of this year's Welcome To Rockville festival in Jacksonville, FL (full set list below).

Tool's set took place after festival organisers were allowed to extend the event's curfew in the wake of thunderstorms affecting the Jacksonville area, with concert goers advised to seek shelter in their vehicles until the weather cleared.

Descending has actually been in the band's setlist for several years – it was first performed at the Air Canada Centre in Toronto, Canada, on the band's North America Winter Tour in 2012 – but the Rockville performance was the first to feature vocals from frontman James Maynard Keenan.

Last week, guitarist Adam Jones teased new Tool track ahead of the Rockville show, while back in February in Keenan tweeted that the release date for the fifth Tool album would be “somewhere between mid-May and mid-July."

The Rockville show was the first of Tool's US tour, while the band's European dates kick off next month, and include a performance at Download Festival  on June 16.