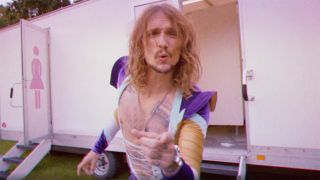 The Darkness have shared a lyric video for their new single How Can I Lose Your Love.

The promo features live footage of the band and has been released to coincide with the their UK and Ireland tour, which will continue tonight (December 3) at Southend Cliffs Pavilion

Speaking about the track, which features on the band’s new album Easter Is Cancelled, guitarist Dan Hawkins says: “Stylistically and emotionally, it’s just big and epic. The guitars are really loud on that tune. In fact, everything is really loud. It draws you in, builds you up, then hits the brake.”

Frontman Justin Hawkins adds: “I suppose this song is describing a relationship where it got away from me and I was helpless. I felt like I was trying to rescue it, but after a while you wonder if it’s worth saving. I’ve been in that position more than once.

The Darkness are playing the new album in full on their current tour along with a selection of fan-favourites.

The Darkness: Easter Is Cancelled Deluxe CD (signed) + vinyl (signed) + Cassette + Signed Band Photograph
In addition to the orange vinyl, Townsend Music also have this mega-package with the album on vinyl, cassette and CD, with bonus tracks AND a signed photograph.View Deal