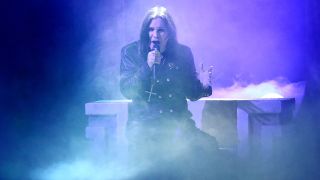 Ozzy Osbourne took to the stage at the American Music Awards in Los Angeles last night to team up once again with Post Malone, Travis Scott and Andrew Watt.

They played the track Take What You Want at The Forum, with Ozzy spending part of the explosive performance encouraging the crowd from the back of the stage.

Ozzy’s appearance came just days after he joined Malone, Scott and California Breed guitarist Watt for the song in LA on the final night of Malone’s tour.

It was Ozzy's first live performance after spending much of 2019 recuperating after being hospitalised with pneumonia and injuring his back, neck and shoulders in a nasty fall at home.

Check out the footage below.

Last week, Ozzy released his brand new single Straight To Hell featuring Guns N’ Roses guitarist Slash. The track, along with Under The Graveyard, will feature on the vocalist’s upcoming studio album Ordinary Man, which is set to launch in January on a date still to be confirmed.

Ozzy's postponed 2019 tour dates have been rescheduled for 2020, while an official video for Straight To Hell will be released soon.