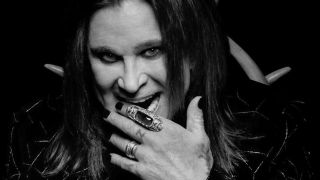 Ozzy Osbourne has released a video for his track Under The Graveyard.

The former Black Sabbath man teased the promo earlier this week, with it now revealed that the shoot took place in Los Angeles and was directed by acclaimed film director, screenwriter and music video director Jonas Akerlund who previously worked with Ozzy on Let Me Hear You Scream and Gets Me Through.

It’s a semi-autobiographical look at Ozzy’s troubled past and stars Jack Kilmer as Ozzy and Jessica Barden as the vocalist’s wife and manager Sharon Osbourne.

Ozzy says: “For Under The Graveyard, Jonas developed the story into a mini-movie. But, to be quite honest, it's hard for me to watch because it takes me back to some of the darkest times in my life.

“Thankfully Sharon was there to pick me up and believe in me. It was the first time she was there to fully support me and build me back up, but it certainly wasn't the last.”

Under The Graveyard was the first track revealed from Ozzy’s upcoming solo album Ordinary Man, which is expected to be released in January through Epic Records.

The Prince Of Darkness followed that with Straight To Hell which featured a guest appearance from Guns N’ Roses guitarist Slash.