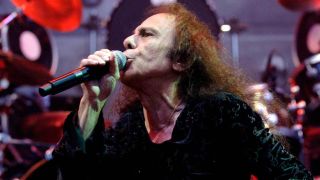 A surprise guest appeared onstage at the Wacken festival back in 2014: Ronnie James Dio. The legendary metal singer joined the all-star tribute band Dio Disciples for a version of the classic Dio anthem We Rock. By all accounts, the performance was the emotional highlight of the band’s set, if not the whole weekend. And he's back on the road with his namesake band next month. Oh, in case you’ve forgotten, Ronnie James Dio died in 2010.

Let’s just repeat that: Ronnie James Dio has been dead for almost a decade. Yet there he was, singing in front of 75,000 people. Actually, that’s not true. It was a hologram of the great man up there on stage, bringing him back from the grave for one night only (well, four-and-a-half minutes if we’re being accurate). And you know what? The whole thing is as creepy as hell.

The idea of resurrecting dead musicians as holograms isn’t new. Rapper Tupac Shakur was the first, beamed out to watching audience at the 2012 Coachella festival 15 years after he was killed in a drive-by shooting. Others given the Lazarus treatment include NWA’s Eazy-E, Frank Sinatra and Elvis. Inevitably, Michael Jackson posthumously muscled in on the action, ‘performing’ at a 2014 awards ceremony, though in fairness that wasn’t as weird as some of the shit he did when he was still alive.

But the return of Ronnie James Dio to the stage more than half a decade after he bought the farm is the first time rock has got involved in this kind of digital zombification. Sure, his widow Wendy – who carefully managed Ronnie’s career and was heavily involved in the Wacken stunt, which took a year to pull off – has every right to use her husband’s image as she sees fit. That doesn’t make it right. Quite the opposite.

You think you’re watching Ronnie Dio up there? You’re not – Ronnie ain’t coming back any more than David Bowie, Jesus or Fred Durst’s career. What you’re seeing is just a trick of the light, one that substitutes everything that makes actual human beings so special – energy, spontaneity, charisma and everything else rock and metal shows thrive on – and replaces it with pre-programmed sentimentality cooked up in a digital lab. So you never saw Dio first time around. That’s your problem. Get over it and then go find something new to listen to and see.

What’s truly depressing is where this is all leading. Imagine a world where Queen went out with a holographic Freddie Mercury, or Ozzy brought Randy Rhoads onstage with him, and then think about what a hollow experience that would be. We could see tours by bands where every member has shuffled off this mortal coil – the Ramones or the Jimi Hendrix Experience, doing the same old shit night after night because they’re basically 40-year-old films beamed onto a screen and not flesh-and-blood musicians. And it doesn’t have to be dead musicians – are you telling me Gene Simmons hasn’t already thought about this for Kiss?

There’s talk of a tour in which Ronnie joins the Dio Disciples every night for seven or eight songs, like a 21st century version of a Victorian freakshow. They should just get a medium and a Ouija board up there instead. It’d be more honest.

There’s a reason Ronnie looked like a ghost during his Wacken appearance, and that’s because he is one. Even Wendy Dio said that seeing her husband onstage again was “weird”. Rock’n’roll is about flesh and blood and sweat and excitement, not cynical echoes from the past. Cherish your memories, of course. But let the dead stay dead.