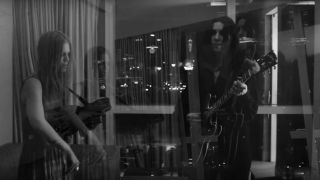 The song features on Myrkur’s new album Mareridt which will arrive on Friday (September 15).

The video was filmed in hotel room in Las Vegas and follows the release of Ulvinde and Måneblôt from the follow-up to 2015’s M.

Mareridt was recorded between Copenhagen and Seattle with producer Randall Dunn, who has previously worked with artists including Earth and Sunn O))) and is said to be “a rich juxtaposition of the dark and the light, the moon and the mother earth, the witch and the saint.”