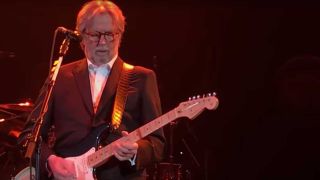 The performances took place on February 17 at London’s Eventim Apollo Hammersmith, at a show organised to celebrate the work of the legendary Cream drummer, died in October at the age of 80.

The show raised funds for the health and welfare charity Leonard Cheshire, which Baker was a supporter of.

The evening started with footage of a Baker interview and drum solo, after which Clapton – who played with Baker in both Cream and Blind Faith – was joined by Pink Floyd's Roger Waters on bass for Cream’s Sunshine of Your Love.

Wood stayed around for Cream's Badge, while Chic's Nile Rodgers joined the party for I Feel Free and Tales of Brave Ulysses. The set continued with most of Blind Faith's debut album, with Clapton and Rogers joined  Steve Winwood on organ, vocals and guitar and Kofi Baker – Ginger's Son – on drums.

The entire cast gathered onstage for the encore, a version of Robert Johnson's Cross Road Blues. Complete seltlist below.

Encore
Cross Road Blues (with everyone)