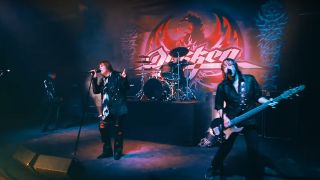 Vocalist Don Dokken, guitarist George Lynch, bassist Jeff Pilson and drummer Mick Brown reunited in 2016 for a run of six shows in Japan – performances which have been documented in upcoming package Return To The East Live.

It’ll be released on CD, DVD and Blu-ray on April 20 via Frontiers – and along with the live material, it’ll also feature the new track, along with bonus acoustic studio songs.

Pilson, who co-wrote the music with Lynch, tells UCR that the studio sessions were “magical” and adds: “Don came in and sang it in a very quick session. It was a couple of hours.

“He had most of the lyrics in his head and he didn’t even write them down. Most of the melodies were kind of prepared, but it just flowed, and we just bounced off of one another and it happened very quickly. I threw the harmonies on and we were done. It was that quick.”

Return To The East Live 2016 is now available for pre-order. Find the cover art and tracklist below.

Return To The East Live 2016 tracklist