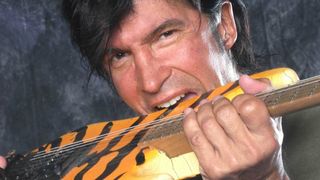 I’ve gotta be completely honest, I’m probably less familiar with my own catalog than your average guy. It’s not like I listen to the stuff, you know? So I’m just gonna go for the obvious answer. But I’m not going to say Mr. Scary. I’m going to say Tooth and Nail. Only because that’s the only solo I’ve ever recorded in my life that I worked out before I went into the studio.

I was at home and I was writing the song, and the solo was incorporated into that process. I actually worked out all the changes and what I was going play on top of it before I ever brought in the studio. I’d never done that prior to or after that. Other than that one, most of my solos were just off the top of my head. So they’re a little more random, and not as well defined. But with Tooth and Nail, I just thought the solo really needed to not be so random and needed to have more defined parts. So I intentionally built it that way. I probably should do more of that!

What is the greatest guitar solo in rock and why?

Half-joking I like to say Cinnamon Girl because it’s very effective and it’s just one note. But we all know what the big ones are: Stairway to Heaven. Hotel California. All Along the Watchtower. Comfortably Numb.

Can you talk about one of them?

Well Comfortably Numb, it strikes an emotional chord. It’s talking guitar. It’s getting at the emotional core of our being and our experience and who we are as animals. It just transcends everything. It’s like it’s its own language. And it does what it’s supposed to do on the purest, most basic level.

What is the first guitar solo you fell in love with and why?

I would have to say probably something off Jeff Beck’s Truth. That was the first rock-guitar album I bought. As far as a specific song, I’d say maybe Rock My Plimsoul, because that was the one our little garage band always played. So I cut my teeth on that.

Is there a solo you always fuck up?

Actually, yeah. Recently I was having a little issue with Sister Mercy, off the first Lynch Mob album. We hadn’t played that song in decades and we just put it back in the set. We don’t really rehearse much as a band, so when we throw a song into the set we’re all supposed to learn it at home independently, and then we’ll practice it at sound check before the first show.

But I never learned it because I’m too friggin’ lazy! Or maybe lazy-slash-busy. But, yeah, we’ve played it the last few weekends we’ve been out and I’ve kind of fudged it pretty badly.

The 100 greatest guitar solos of all time