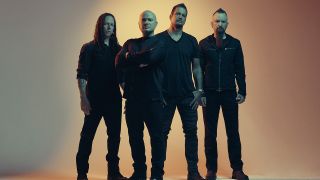 Disturbed have released a behind-the-scenes video showing them working on their track Are You Ready.

The band shared a promo of the song last month as they announced details of their highly anticipated new album Evolution, which will launch on October 19 via Reprise Records.

The clip features footage from the studio along with an interview with frontman David Draiman, who says: “This album is a very heavy undertaking. We're coming off of one of the most successful record cycles and touring cycles of our career with Immortalized. It’s a lot to live up to.”

Draiman is the cover star of the latest issue of Metal Hammer magazine, which is on sale now. And in an exclusive interview, he calls Evolution their “Black Album.”

He adds: “We’ve always used that as a goal – the record that literally every single track on it could be a hit. A record that breaks doors down, that opens up new opportunities to us, that helps you achieve true immortality as an artist.”

Disturbed - Evolution
Disturbed are back with their new album Evolution - the highly anticipated follow-up to 2015’s Immortalized featuring the stunning lead track Are You Ready.View Deal