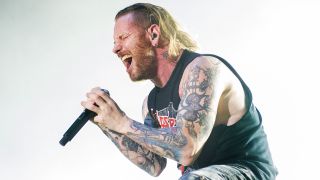 The Slipknot and Stone Sour frontman was joined by the dance troupe Cherry Bombs, who feature Corey’s fiancee Alicia Dove – and they thrilled the crowd by playing a set which included covers of It’s So Easy by Guns N’ Roses and Hot For Teacher by Van Halen on the night.

Footage from the evening has been shared online and can be watched below.

Blabbermouth report that the show sold out within an hour when tickets went onsale back in February.

It’s been a busy 2019 for Taylor. Along with working on the new Slipknot album, the vocalist has also been designing his new mask with Tom Savini, Jason Baker and Necro Disco, and he’s also guested on tracks by Falling In Reverse and UK rapper Kid Bookie.

Slipknot will play dates across Europe this summer – including a headline set at the UK’s Download festival.

They’ll then head out on the Knotfest Roadshow across North America and release their as-yet-untitled album on August 9.