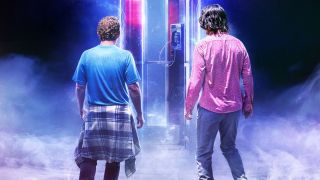 A trailer for the upcoming movie Bill & Ted Face The Music has been released.

The film starring Keanu Reeves and Alex Winter is set to hit the silver screen later this year, with the synopsis reading: “Once told they'd save the universe during a time-traveling adventure, two would-be rockers from San Dimas, California find themselves as middle-aged dads still trying to crank out a hit song and fulfil their destiny.”

Bill & Ted Face The Music was directed by Dean Parisot and is the follow-up to 1991’s Bill & Ted’s Bogus Journey.

Last month, Mastodon’s Bill Kelliher revealed the band had recorded a track for the movie, telling the RRBG podcast: “We got asked a couple of months ago to be a part of the new Bill & Ted movie, to put a song in there. So we wrote a song which we’re wrapping up now. It’s pretty fun.”

Kelliher went on to say that working on a track for Hollywood came with its own challenges, and said Parisot wasn’t too keen on part of the track when he first heard it.

Kelliher explained: “We wrote a killer fucking song and the music director – the one that chose us – he loves the song, but the director was like, ‘This is clashing with that.’ I'm like, ‘You've had it for months. Why didn't you tell us months ago?' Especially now with the pandemic. Nobody's in the same room together!”

Bill & Ted Face The Music is due to hit cinemas from August 21.