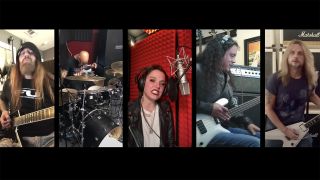 With the current lockdown preventing musicians from touring or even playing one-off shows, many artists have been coming up with new ways of keeping themselves busy while also giving fans something to cheer about.

The latest project sees former Machine Head guitarist Phil Demmel create the Collab-A-Jam – a way of bringing musicians from around the world together to play through some of their favourite tracks.

For the first cover, Demmel picked out Thin Lizzy’s 1977 track Bad Reputation – and he invited a few friends along for the ride.

Demmel says: “First in a series. After Marta and I had so much fun doing No Excuses,  I invited my buds Dave McClain (Sacred Reich/Machine Head), Richie Faulkner (Judas Preist), Mike Inez (Alice in Chains, Ozzy Osbourne, BLS, pretty much every band) and resident bad-ass Lzzy Hale (Halestorm) to jam on one of my favourite tunes by one of my favourite bands.”

Demmel says it was mixed by Paul Fig with the video editing handled by Todd Shuss, and adds: “More Collab-A-Jams coming and look for a guest-oriented guitar breakdown and playthrough show coming as soon as the shelter in place rules allow.”

The following month, Demmel stepped in to help out Slayer on the thrash giants European farewell tour, after guitarist Gary Holt had to fly back to the US to care for his ill father.

Demmel later reported that getting the call from Slayer “saved my musical career.”