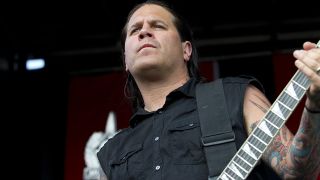 Slayer needed help for the remaining shows on the 2018 European tour after Gary Holt returned home to look after his ill father.

Demmel received the text from Slayer less than 24 hours after he walked away from Machine Head following the conclusion of their Freaks & Zeroes tour – and it’s a move that he’s looked back on in a new interview with Music Radar.

Demmel says: “I think Slayer saved my musical career in some way. In under 24 hours, I went from the last day of a tour wondering whether I was even good enough to be in bands any more, to this mind-blowing text from Kerry King asking if I could play in Slayer.

“I guess the reason I’m in this position now is because of the people I had met, almost from a networking standpoint.

“I knew the guys in Slayer before I got that text. If being a session player is the route you want to go down, I would say avoid getting too centrally focused on one style. Watch that Netflix movie Hired Gun – everyone they talk to explains how session players are there to do whatever the artist wants. You have to play what you are expected to.”

Since his departure from Machine Head, Demmel has resurrected his Vio-lence project – and has been involved with a few other projects.

The guitarist adds: “I want to be honest to who I am as a player. I was already 36 when I joined Machine Head. Then there was 16 years of that and now I feel like I’m just getting started again.

“Things are popping up. I’ve done a few guest solos here and there as well as music for video game companies.

“Mainly, I’m just enjoying being at home and running the business – me and my wife Marta bought a bar where we live and it’s doing well. There will be a solo record at one point I’m sure, so let’s see what happens. I’m flying by the seat of my pants right here!”