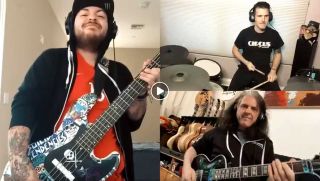 Testament guitarist Alex Skolnick has launched a video in which he, Anthrax drummer Charlie Benante and Suicidal Tendencies bassist Ra Diaz cover Rush's classic instrumental YYZ. The trio performed the song under lockdown restrictions, with each musician in a different location.

"Happy Sunday!" wrote Skolnick. "Hope everyone’s hanging in OK. So, one bit of good news in light of everything: This quarantine has triggered some interesting musical projects that might not happen otherwise.

"Here is my first virtual video jam with others (far from the last, I have a feeling). This is for all you Rush fans."

He adds, "Here is our version of the Rush classic YYZ. Rush inspired all three of us to be better musicians. Alex Lifeson, Geddy Lee and the great Neil Peart not only played amazing, they also wrote some of the best songs. We are honoured to play a little YYZ for you. Hope this magic music makes your morning/afternoon."

Yesterday, Testament released an animated video for Children Of The Next Level, taken from the band's upcoming album Titans Of Creation, which will be released on April 17 through Nuclear Blast.

Last month it was reported that Testament frontman Chuck Billy, his wife Tiffany and some of the band’s crew had all been diagnosed with coronavirus.

The news came through weeks after the COVID-19 outbreak in Italy forced the cancellation of the band's show with Exodus in Milan.

Billy has since spoken about what it’s been like living with the virus in an interview with The Metal Voice, revealing that he’s feeling better as the days go on.

Rush are the cover stars of the current issue of Classic Rock.