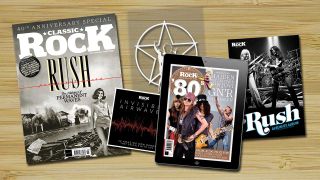 It's been a mind-blowing few weeks, but the brand new issue of Classic Rock is now on sale.

We're really proud of it. It was the first time the team had finished an issue from the new 'normal' of sofas, makeshift desks and precariously balanced laptops, aided and abetted by Team Classic Rock's various feline assistants. Google Hangouts became our new home, and we got it done.

The new issue is a Rush spectacular celebrating 40 years of Permanent Waves (we spoke with Geddy, Alex, producer Terry Brown and art director Hugh Syme about it) and it comes with a Rush album-by-album guide and an official Rush 'Starman' laptop sticker.

Understandably, we've had quite a few queries as to how the current coronavirus crisis might affect your favourite high-voltage rock'n'roll magazine.

As it stands right now, it's as near to business as usual as possible.

The new issue will be available in the shops - specifically the supermarkets and the smaller newsagents that remain open (newsagents are classified as essential retailers). But, knowing that trips outside are (and should be!) limited, we have upped our warehouse stock for those who wish to get their Classic Rock fix directly from us.

Using the word 'unprecedented' already seems clichéd, but it's also the truth. And things are changing by the day. At the moment Team Classic Rock (like so many) are all working from home, and one thing you can be certain of in these uncertain times is that we're all working hard to bring you the best content and coverage of high-voltage rock’n’roll, whether online, through our social channels and through the print magazine.

We're here to support the music scene we hold dear, so that's you, the bands, the venues, the labels, promoters… we're all in this together.

We'll adapt, there might be minor changes in the short term, but know one thing, we'll get through this stronger and this too shall pass. And think how epic the gigs and festivals will be once we're all able to congregate again.

In the meantime, please look after yourselves and one another. And keep in touch!

Rush
After the “soul crushing” slog of making the Hemispheres album, for their next the planets seemed to be aligned. Permanent Waves found the band at the top of their game and put them in a different league. This is the story of the making of a masterpiece.

Robby Krieger
In this month’s Classic Rock Interview, we meet the man who swapped the horn for guitar, joined The Doors and wrote enduring classics including Light My Fire.

The Hu
A life of Mongolian traditions and rigorous classical training, mingled with a love of hard rock and metal, has made The Hu one of the most exciting new prospects in music.

Peter Green
Inside the all-star concert organised by Mick Fleetwood to celebrate the genius of guitar great Peter Green.

Queen
Even as his time ran out, Freddie Mercury was the driving force behind the band’s 1991 album Innuendo and the voice from beyond the grave on 1995’s Made In Heaven.

Giuda
Putting a reinvigorating modern spin on a style of music that was all about simply having fun, Italian glam-rockers Giuda are “making this totally unfashionable music fashionable again”.

Bernie Marsden
Bernie Marsden’s cv reads like a budding rock muso’s dream. Not only has he lived alongside some rock greats, he’s also one of the best blues-rock guitarists of his generation.

Therapy?
Thirty years on from powering their way into Northern Ireland’s indie rock scene, Andy Cairns and co. have no intention of mellowing into middle age.

Brian Fallon
Find out what the former Gaslight Anthem frontman bought when we gave him £50 to spend on vinyl records.

What's on the CD

Invisible Airwaves
Twelve of the most seductive slices of new music, from some of the hottest new artists out there, including Gluttons, Tiger Skull, Mother Vulture, Temple Smoke and more. Ride the waves and enjoy.

The Dirt
The Jam’s updated interactive exhibition is due to visit Brighton in August; Genesis announce their first tour in 13 years; Led Zeppelin win their appeal in the long-running Stairway To Heaven legal battle; Journey fire their rhythm section; the coronavirus crisis wreaks havoc with touring schedules… Welcome back Nightwish and Nektar… Say hello to Starbenders and Marisa & The Moths… Say goodbye to Keith Olsen, Andrew Weatherall, Lyle Mays.

The Stories Behind The Songs: Quireboys
The story of 7 O’Clock, Spike and co’s infectious, rabble-rousing crowd favourite that didn’t even have a chorus for the first few years of its life.

Q&A: Ozzy Osbourne
The Prince Of Darkness looks back on a difficult year, a new album and being an ‘ordinary man’.

Six Things You Need To Know About… Broken Witt Rebels
They have plans way above their station, and they plan to “come, conquer and then fuck off”.

Live Previews
Our previews of now-postponed gigs from Nick Mason’s A Saucerful Of Secrets, Richard Marx, Redd Kross, Scarlet Rebels and Phil Campbell & The Bastard Sons. Due to numerous and ongoing cancellations there is no Tour Dates section this issue.

The Soundtrack Of My Life: Joe Satriani
The six-string whizz on the records and artists that are of lasting significance to him.

Classic Rock 274 is with UK stockists now and is also available to buy online. You can subscribe to Classic Rock below.