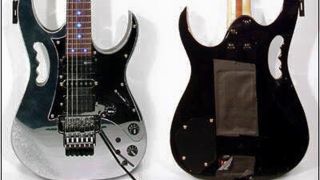 A guitar owned by Steve Vai was stolen from outside a venue where the guitar hero was performing at a benefit show for Tony McAlpine.

The custom mirror JEM – which Vai nicknamed ‘Bo’ – was taken from outside the Wiltern Theater in Los Angeles on December 12 (Saturday) where he and a host of other musicians including Tom Morello, Zakk Wylde, Billy Sheehan, John 5, Mike Portnoy and Nuno Bettencourt were performing.

The show was set up to raise funds for guitarist McAlpine, who was recently diagnosed with colon cancer and had to postpone a string of tour dates while he undergoes treatment.

Vai’s guitar carries the serial number F0006311 and has a host of unique features, such as blue LED fret dots and a red laser in the headstock.

Ahead of the benefit show, Vai said: “It’s a great privilege to take to the stage with my friends Zakk, John, Mike and Billy in support of our dear friend Tony.

“Tony has always been blessed with an exceptional talent and more so, he’s an exceptionally cool guy. It’s a great cause and will be a magical evening of guitar extravaganza.”