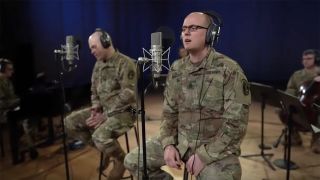 The United States Army Band have released a cover of Rush’s Hold Your Fire track Time Stand Still as a tribute to Neil Peart.

The video has been shared on Rush’s social media channels, with the US Army Band deciding to record the song as Sergeant First Class Tim Whalen is a lifelong Rush fan.

Whalen explains: “The lyrics to this song have always resonated deeply with me, and they show Neil’s heart. I wanted to showcase the deep humanity he had in his writing.

“The song is about life moving too fast, due to both things we can control and things we can’t, and the desire to hold on to something just a little longer.

“This is such a universal message, whether it be children growing up too fast, a loved one dying, or a soldier leaving home wondering if they’ll ever see their family again.”

Rush drummer Peart died in January after a three and a half year battle with brain cancer.

Last week, Mike Portnoy smashed his way through a number of Rush classics on a tiny drum kit for charity. The kit is currently being auctioned with proceeds going to brain cancer research, and, at the time of writing, the winning bid is sitting at $1575.

The new issue of Prog magazine, which is on sale now, also pays tribute to Peart, with the drumming legend featuring on the front cover. Inside we look at Peart's finest musical and lyric moments and the enigma behind the public face of the man Carl Palmer called “one of the most innovative drummers in the prog world.”

Use our store finder to find your nearest stockist.