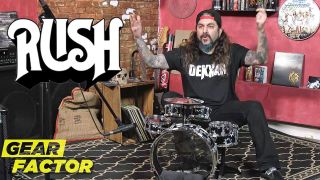 Mike Portnoy has paid tribute to Neil Peart by battering his way through a selection of Rush classics on a tiny children’s drum kit... and he's done it all for charity.

Portnoy is no stranger to dealing with the challenges of playing on kits made for kids, with the musician previously put through his paces on a Hello Kitty kit and a Pokemon-themed kit.

Those were both set up by Loudwire, who are behind the latest video clip.

In the video below, Portnoy attempts to play YYZ, Spirit Of Radio and the 2112 Overture, with varying degrees of success, with a few technical difficulties getting in the way. He then decides to keep people guessing with a Rush ‘name that tune.’

The drum kit is now up for auction, with proceeds going to charity.

Portnoy explains: “I know we had a lot of fun, but all joking aside, losing Neil has been truly devastating and heartbreaking and I don’t want to make light out of that.

“So we’re going to auction the kit off and sign it and the proceeds for this are going to go to brain cancer research.”

Peart died last month after a three and a half year battle with brain cancer.

The new issue of Prog magazine, which is on sale now, pays tribute to Peart, with the drumming legend featuring on the front cover. Inside we look at Peart's finest musical and lyric moments and the enigma behind the public face of the man Carl Palmer called “one of the most innovative drummers in the prog world.”

Use our store finder to find your nearest stockist.