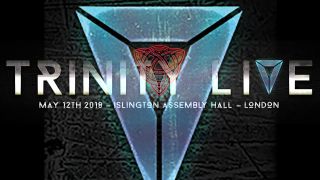 Trinity Live, the charity prog event, has announced it will not be taking place next year. However the organisers promise to return in 2021.

In a statement, the organisers say: "We here at Trinity Live are beyond disappointed to have to announce that we are not going to be able to hold Trinity 5 as planned in May 2020… after the sad and untimely demise of The Assembly in Leamington Spa (the spiritual home of Trinity), we have spent a lot of time searching for both a suitable and available venue and sadly this has proved fruitless so as of today Trinity 5 is a No-Go.

"After much discussion, we as a team agreed to put Trinity on hold for next year as we felt downsizing was not an option – the Trinity shows have been, and always will be, spectacular shows and we all felt that going smaller would not be representative of what we are trying to achieve.

However, do not despair… Trinity is only going on holiday, taking a well-earned break, and we will be back bigger, better, louder and brighter in 2021! Look forward to seeing you all then."

Trinity launched in 2014 raising money cancer charities in the wake of Magenta singer Christina Booth's then diagnosis. Although cancelled in 2015, it returned in 2016 and has been an annual fixture since. This year's event saw Mostly Autumn headline a bill that also featured Godsticks, Alan Reed, Joe Payne, Last Flight To Pluto and C: Live Collective.