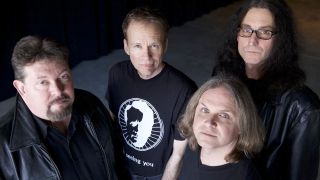 Tiles have premiered their video for Shelter In Place exclusively with Prog.

The track features on the band’s sixth studio release entitled Pretending 2 Run, which is set for launch on April 15 via Laser’s Edge.

Shelter In Place is the second track on the album and features a guitar riff that “changes perspectives as flurries of drums and shifting bass rhythms propel the song from tense claustrophobic verses to spacious and melodic choruses.”

Guitarist Chris Herin previously revealed the Detroit outfit hadn’t initially planned a double album but with ideas coming thick and fast, they decided the material couldn’t be contained on a single disc.

He added: “So here we are with an elaborate concept album that follows in the best of prog traditions. Each disc plays like one long song. To help deliver to the full potential, we’ve enlisted a string quartet, a 25-piece orchestra and a host of special guests.”

Tiles have two live shows planned for May. They’ll play the Token Lounge in Westland, Michigan, on May 15 and New York’s DROM on the 19th of the month.