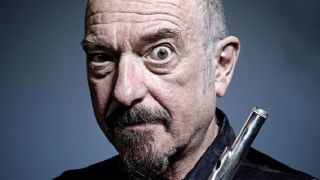 Jethro Tull mainman Ian Anderson will make a guest appearance on the upcoming album by US prog outfit Tiles.

The invitation had been open since 1999, when the band released their album Presents Of Mind and Anderson became a fan. Now he’s found a gap in his schedule to lay down a flute track, and it’ll appear on Tiles’ next release, Other Arrangements.

Guitarist Chris Herin says: “Over the years we floated the idea, and eventually the timing was right. He was just finishing up Homo Erraticus, and had a window of opportunity before he dove into tour rehearsals and promotional stuff.

“We sent Ian a moody atmospheric tune, and he wove some cool melodies in between vocal phrases – then cut loose with his trademark improvisation during the rideout solo.

“I think I listened to it 20 times to make sure it really happened. What a thrill for us, and what a generous gesture from an icon of progressive rock.”

Other Arrangements is set for release next year, also featuring two drum tracks from Mike Portnoy.

Meanwhile, Anderson’s Homo Erraticus – the third album to feature the Gerald Bostock character – will be launched on April 14, ahead of an extensive UK tour.