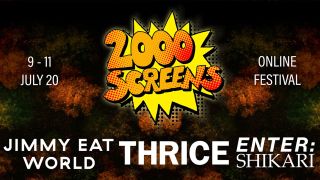 This year’s 2000 Trees festival in the UK should have been taking place this coming weekend – but it was called off back in April due to lockdown restrictions.

While organisers have already confirmed Jimmy Eat World will headline the 2021 festival at Upcote Farm near Cheltenham in Gloucestershire on July 8-10 next year, they’re planning on keeping fans entertained later this week with a host of online events.

Titled 2000 Screens, it’ll get under way on Thursday (July 9) and run through Saturday, with music, interviews and more – all streamed through Instagram and Facebook.

Festival organiser James Scarlett explains: “Obviously we’re gutted that there won’t be a 2000 Trees this summer, but I can promise you that this is the next best thing.

“We’ve got loads of amazing exclusive content and I’m particularly excited by the live sets from Jimmy Eat World and Jamie Lenman. Honestly, they have to be seen to be believed!

"There is also an interview between some of the organisers and Sappenin podcast – make sure you tune in for loads of reminiscing and never before told stories plus a couple of lineup hints for 2021.”

In May, 2000 Trees launched a crowdfunding drive to help protect the festival’s future. By donating, music fans can get their hands on limited edition merch, including t-shirts, wristbands, art prints and more.

For more on the festival, visit the official website.