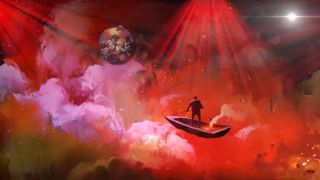 The Sword’s Kyle Shutt has announced that he’ll release a heavy metal tribute to Pink Floyd later this year.

Titled Doom Side Of The Moon, it will arrive on December 8 via Music Theories Recording/Mascot Label Group and features the guitarist along with bassist Bryan Richie, drummer Santiago Vela III, vocalist Alex Marrero, saxophonist Jason Frey and keyboardist Joe Cornetti.

Shutt says: “The idea came to me after getting baked and wanting to hear a heavy version of Time. I thought, ‘Why not just cover the whole album?’

“After sitting down and working out some loose concepts, the arrangement for Money materialised and I realised that I could totally do this if I assembled the right band.

“It felt a little strange messing with someone’s legacy, but I’m treating it as a celebration of one of the greatest bands to ever rock, a party that everyone is invited to.”

To mark the announcement, Shutt has released an animated video for Money. Doom Side Of The Moon is now available for pre-order.

Doom Side Of The Moon tracklist

The inside story of Pink Floyd’s classic Live At Pompeii