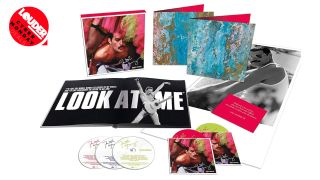 Released back in October, this new collection of Freddie Mercury's solo work was clearly designed to cash-in on the new-found love for the Queen frontman after the wild success of the Bohemian Rhapsody movie. But it did draw some criticism for its price.

Now that Cyber Monday is here and it's less than £60 for the first time, it's a much more attractive box for Queen fan.

What's in it? Three CDs with 32 tracks; a Blu-ray and DVD featuring 13 promo videos and interview; a double-sided poster, and a 120-page 10”x10” hardback book full of rare and unpublished pictures, and an introduction from Rami Malek, the actor who played Freddie so magnificently in the movie.