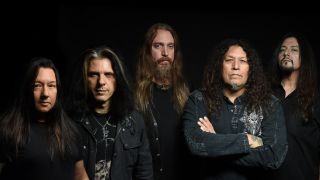 Testament have revealed the cover art for their upcoming 11th album Brotherhood Of The Snake.

It arrives on October 28 via Nuclear Blast – with the artwork created by Eliran Kantor, who previously illustrated the covers of Testament albums Dark Roots Of Earth from 2012 and 2009’s The Formation Of Damnation.

Kantor says: “Guitarist Eric Peterson told me of the title, referring to a secret society group – and I wanted to focus on the occult aspect of it without leaning on the already available myths.

“I pictured a ritual involving blindfolded figures coming out of chalices of black oil, holding scythes forming the teeth of a thee-headed snake.

“Looking for ways to incorporate the masonic pyramid felt like a great opportunity to use the classic logo while adding something new to it, and also give it an active part in the plot.”

He continues: “There are many tiny details adding to the atmosphere. Red tongue bookmarks in the books, two more ancient-looking figures in the shadows hinting at the brotherhood’s lineage and two serpent-shaped fountain tubes pouring the black oil. The latter two were suggested by the band.”

Earlier this month, Testament’s Peterson admitted they had to write Brotherhood Of The Snake quickly due to their touring commitments – but said that turned out to be a good thing as pressure “kicks you in the ass a little bit.”

A full tracklist will be announced in due course.

Testament have a number of European shows scheduled over the coming months before they support Amon Amarth on their UK and Ireland winter tour.