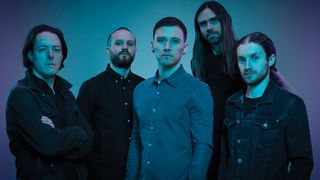 UK prog metallers TesseracT have announced European tour dates for November,with US prog metallers Between The Buried & Me and Australian guitar sensation Plini as support.

“To have such a strong support bill with us means the European Tour could be the event of 2018 for many progressive rock fans,” says TesseracT vocalist Dan Tompkins. “We’re bringing an exciting new production, which properly represents TesseracT in a live environment. Joining us are our friends in Between The Buried And Me – it’s been a long time since we last toured with them and it will definitely be worth the wait. To cap it all off we’re also bringing along the mighty Plini – this will be our second tour of 2018 with him, he’s an amazing musician and gives the tour a great dynamism!’

TesseracT will release their new album, Sonder, through Kscope on April 20. It will be released on CD/2CD – featuring binaural album bonus disc/black LP/Crystal Clear vinyl LP/picture disc (exclusive to the band’s webstores) and digitally (with digital album pre-order receiving Luminary as an instant download) and isavailable to pre order from here.

Tickets go on sale from 9 March at 9am. See the band’s website for details.