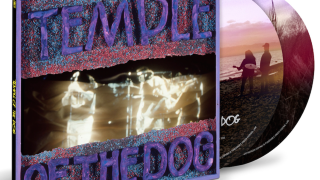 Temple Of The Dog have made ‘lost’ track Black Cat available to stream.

The demo track is included as an instant download with iTunes pre-orders of the upcoming 25th anniversary deluxe reissue of the group’s 1991 self-titled debut album. Black Cat can be heard below.

The package will be released on September 30 via Universal Music.

They recently confirmed they will reunite this year and hit the road on their first ever tour, with five US shows confirmed for November.

Cornell said: “We wanted to do the one thing we never got to do, play shows and see what it feels like to be the band that we walked away from 25 years ago.”

As well as the digital version, the reissue will be available in four formats – a four disc super deluxe, a double LP, a two CD deluxe and a single CD.

Temple Of The Dog’s one-off album was designed as a tribute to their friend and collaborator, Mother Love Bone singer Andrew Wood, who’d died the previous year.

Temple Of The Dog won't rule out Eddie Vedder comeback