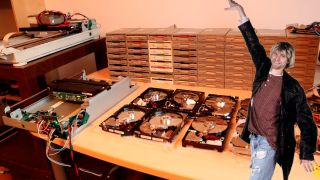 Watch as the device performs the hit single from Nirvana’s second album Nevermind in the video below. Zadrozniak calls his version Smells Like Nerd Spirit.

Zadrozniak says: “Every device with an electric motor is able to generate a sound. Scanners and floppy drives use stepper motors to move the head with sensors which scans the image or performs read/write operations on a magnetic disk.

“The sound generated by a motor depends on driving speed. The higher the frequency, the greater the pitch. Hard disks use a magnet and a coil to tilt the head. When voltage is supplied for long enough, the head speeds up and hits the bound making the ‘drum hit’ sound.”

The Floppotron has also produced versions of the Hawaii Five-O theme tune and the Imperial March from Star Wars.