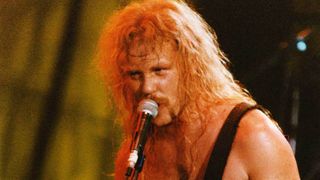 On May 11, 1990, something amazing happened. No, make that something ludicrous! In fact, it makes Leicester City’s triumph in winning the Premier League seem almost inconsequential. Well, not quite, but it certainly took the metal world by surprise, because Metallica played The Marquee Club in London. More than that, they were on the bill with Metal Church. And they actually opened for the Seattle band!

It’s not the first time Metallica had played a surprise gig in London. On August 20, 1987 they had played at the 100 Club – just up the road from The Marquee – but on that occasion they’d been the headliners. This, was a little different.

“There had always been a good friendship between the two bands,” recalls Metal Church vocalist Mike Howe. “At the time, Metallica were in London preparing for a short European tour (they were due to play three shows in the UK later that month) and we were on tour promoting the Blessing In Disguise album.”

According to John Marshall, who was Metal Church’s guitarist at the time, the whole situation was sorted out between the respective managers.

“I believe their management went to ours and suggested the idea. They then worked out all the details between them.”

Given that Marshall had been Kirk Hammett’s guitar tech a few years earlier, and had even played guitar onstage with Metallica when James Hetfield broke his arm, you’d have thought Marshall might have been closely involved with this set-up. But…

“I had no input whatsoever. And when it came to the gig itself, Metallica didn’t need me to help with the soundcheck or anything like that. By then I hadn’t teched for Metallica in over five years, and was on tour with Metal Church as a band member; besides, by then Metallica had a top notch crew of their own. Even if I did have time to help, they wouldn’t have needed me.”

There was also never any question of who would be headlining on the night. This was Metal Church’s gig, and as Marshall underlines, they were always going to go onstage after Metallica.

“This was a Metal Church show that had been booked far in advance, as part of a European tour. Metallica wouldn’t have come in and shoved us out of our own gig. They just wanted to do an unannounced warm-up gig for their upcoming shows.”

Howe recalls that Metallica were given no special privileges as the support band on the night.

“As far as I can recall they didn’t get a soundcheck,” laughs Howe, “just because there wasn’t any time available. And they were quite happy to set up their equipment in front of ours onstage, so there was very little room for them to move – especially when you consider the size of Lars Ulrich’s drum kit. But they were so professional and experienced, none of this mattered to them. The guys just got on with the gig!”

That night, Metallica did a nine song set, but came on to only a half full venue. This performance had been kept very much under wraps, and the band were billed as Vertigo. Three years earlier at the 100 Club, while they had appeared under the pseudonym of Damage, Inc. word of the gig had successfully leaked out, ensuring the place was packed. Not this time, it was such a closely guarded secret that hardly anyone knew before going to The Marquee. So, there was the sight of calm metalheads sauntering into the club, nonchalantly glancing to see who was onstage as they headed for the bar – and being shaken to find it was…

“Fuck! It’s fucking Metallica!” one stunned fan was heard to shout as they rushed to the front of the stage as the band lashed into Creeping Death. It was a tight, punchy 50 minutes or so, with the occasional surprise. For Whom The Bell Tolls included a touch of The Star Spangled Banner, while only part of No Remorse was played. This was also the first time the band had ever played The Shortest Straw live.

The sound was bad, but then that didn’t bother anyone, Metallica were clearly enjoying the experience. Festivals apart, they had never supported anyone in the UK before so this was a unique event, and it finished with covers of Misfits’ Last Caress and Helpless from Diamond Head.

Of course, there was a clamour for more, as the venue began to fill, but that was never going to happen.

Howe remembers that Metal Church had no misgivings about going on after Metallica.

“Sure, it was a little intimidating, but also very exciting, and we were lucky that the place was full of Metal Church fans, so following Metallica wasn’t too much of a problem. This was the last gig of our tour, so we knew our set really well and were very tight onstage.

“Metallica did stand on the mixing desk to watch us, and seeing the guys there was a little overpowering. But we just got on with things.”

There was never any discussion of Metallica and Metal Church combining forces for a finalé.

“We just didn’t have the time to work out a jam session,” admits Howe. “So, that was never on the cards. After the gig, though, we all went out for drinks. I couldn’t tell you where we ended up, because we all got so hammered that I have no memory of the night! But it was the perfect way to bring our tour to an end, and to celebrate what had been an amazing gig.”

Looking back at the performance shortly afterwards, Ulrich seemed amused by it all.

“It was fun doing that, you know what we’re like. We always look to do things differently and the idea of opening for Metal Church just came up. As we were in London at the same time as they were doing The Marquee, it went from there. Supporting them was like going back to our early days, when we regularly opened for bands. It made us appreciate how far we’ve come!”

Metal Church are playing The Underworld in London on May 10. Their latest album XI is out now, via Nuclear Blast.