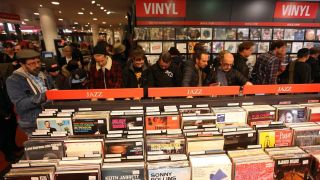 The resurgence of vinyl sales and a massive rise in music streaming numbers in 2015 helped the retail value of the music business rise in Britain for the first time in more than 10 years.

Sales of vinyl rose 64% to 2.1 million and HMV says it sold a turntable every minute over the Christmas shopping period. Meanwhile, trade body the BPI says 26.8 billion songs were streamed last year, a rise of 82%.

The overall value of the music business, which includes physical sales and a percentage of streaming service subscriptions, rose from £1.03billion in 2014 to £1.06bn – the first increase since 2004.

BPI chief executive Geoff Taylor tells the BBC: “Yet again it’s UK artists who are driving this growth and inspiring the fans, whether it’s global icons such as Adele, Ed Sheeran, Sam Smith and One Direction, or recent British breakthroughs and newcomers like Jess Glynne, Little Mix and James Bay.”

Pink Floyd’s The Endless River was among the best-selling vinyl titles of 2015 and was also a viral hit on Spotify.