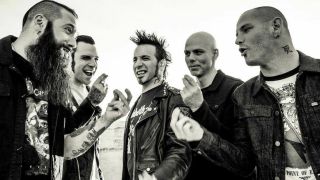 Stone Sour have issued a snippet of their take on Metallica track Creeping Death.

It features on their upcoming covers EP Meanwhile In Burbank… which is released on April 18 as a Record Store Day exclusive.

Guitarist Josh Rand says of the project: “The coolest part for me was not only trying to play everything note for note but also trying to match the guitar tone of all these great players.”

The EP also features covers of tracks by Alice In Chains, Judas Priest, Kiss and Black Sabbath – although their take on Metal Church’s The Dark won’t be included on the release.

Corey Taylor and co recently confirmed that Christian Martucci was the permanent replacement for guitarist Jim Root who split with the group in 2013.

Taylor and Slipknot will headline Download on Friday June 12.