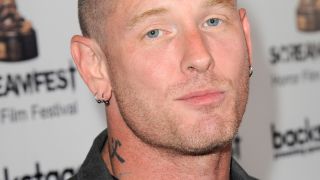 Corey Taylor and co started work on the record which features their take on tracks by Alice In Chains, Judas Priest, Kiss, Metallica and Black Sabbath in the latter half of 2014.

And guitarist Josh Rand says the individual tracks have been chosen specifically because they mean something significant to each member of the band.

He reports: “Back in February of 2014 while Stone Sour was touring, Corey approached me about doing a cover of the Metal Church song The Dark for the movie Fear Clinic.

“I thought it would be cool not only to record The Dark, but the five cover songs that we had played on that tour.

“The idea was not to shy away from a song because it was popular or pick a band that most people might not have heard – but to pick ones that truly meant something to one of us at some point in our life.”

Taylor stars in Fear Clinic, which will be released on DVD/Blu-ray on March 30 in the UK. They released a promo for The Dark last month.

Meanwhile In Burbank… will be sold through select stores on April 18 to mark Record Store Day.

Taylor’s Slipknot are one of the headline acts at this year’s Download festival at Donington Park on the weekend of June 12-14.